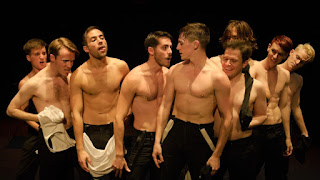 Last Friday night Stuart and I went to see ultraviolent thriller A Clockwork Orange at the Park Theatre in London's down-at-heel Finsbury Park.

Synopsis: Very violent, homoerotic, visceral and balletic. What's not to like?

This stage adaptation of Anthony Burgess’s novel is set in a near future English society featuring a subculture of extreme youth violence, the teenage protagonist, anti-hero Alex, narrates his violent exploits and his experiences with state authorities intent on reforming him using an extreme form of aversion therapy.

Alex is played by Jonno Davies and he is a tall, ginger-haired, musclebound hunk. The other eight male members of the cast are similarly buff playing numerous parts from Alex's gang members to police to housewives. For this is an all-male production with everyone sporting skin-tight black jeans, tight white t-shirts, skimpy underwear, black eyeliner and malevolent grins. There is homoeroticism aplenty (they are frequently t-shirtless) and there is much homosexual violence to boot. 'Boot' being the operative word.

Female director Alexandra Spencer-Jones has created a wonderful non-stop 90-minutes of fighting, dancing, and thuggery to a soundtrack of Freddie Mercury, David Bowie and The Eurhythmics who like Alex (love to listen to) (Ludwig van) Beethoven.

Recommended - if you like aesthetic violence, hot men and are not easily shocked.

Posted by overyourhead at Tuesday, February 21, 2017