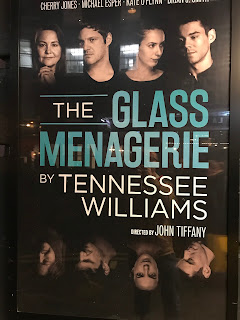 Last night Stuart and I went to see The Glass Menagerie at The Duke of York's theatre in London's glitzy West End.

Synopsis: From the moment Kate O’Flynn appears from down the back of the sofa you know we are on for something special. Great production. Great play. And the gay undertones are there for all to see.

A domineering mother. A daughter lost in a world of her own. A son desperate to leave. Former Southern Belle Amanda Wingfield, played magnificently by Tony Award-winning Broadway star Cherry Jones, enlists the help of shoemaker but aspiring poet son Tom (Michael Esper) to find a husband for her fragile daughter Laura (Kate O’Flynn). But will the long-awaited ‘gentleman caller’ Jim O'Connor (Brian J. Smith) fulfil or shatter the family’s delicate dreams?

Olivier and Tony Award-winning director John Tiffany (Harry Potter and the Cursed Child Parts One and Two, Let the Right One In, Black Watch) has a hit on his hands with this revival of his visionary staging of Tennessee Williams’ heart-rending masterpiece about a family struggling to survive on hopes and dreams.

The Glass Menagerie is a five-character memory play by Tennessee Williams that premiered in 1944 and catapulted Williams from obscurity to fame. The play has strong autobiographical elements, featuring characters based on Williams himself, his histrionic mother, and his mentally fragile sister Rose. In writing the play, Williams drew on an earlier short story, as well as a screenplay he had written under the title of The Gentleman Caller.

Recommended (although not quite as good as his later work Cat on a Hot Tin Roof.)
Posted by overyourhead at Friday, February 10, 2017