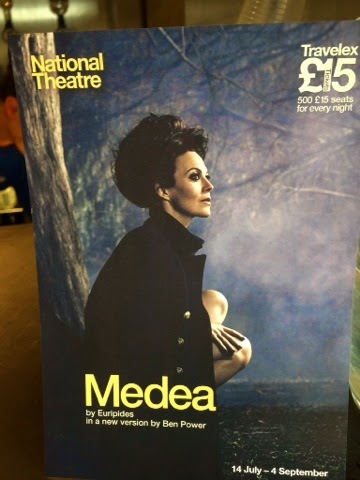 Last night Stuart and I went to see the National Theatre's new production of Medea at the Olivier Theatre on London's glitzy South Bank.

Starring the wonderful Helen McCrory it's a new version of the child-murdering story by Ben Power. Carrie Cracknell's direction is top notch featuring as it does powerful performances from all the cast, hypnotic dancing by the Muses/Goddesses and haunting music composed by Will Gregory and Alison Goldfapp.

We just couldn't take our eyes off Helen McCrory for the entire 90 minutes. She was simply mesmerising as Medea, the woman scorned. If ultimately this dish of revenge is served not just cold but positively icy then it's journey from kitchen sink drama to high table is by no means a steady one. McCrory doesn't portray Medea as an out and out monster - rather a woman who is simply out of control. She is trying to take back her life. She is full of doubt and hates herself for what she means to do. But it is her only way of getting back at her husband Jason who has rejected her. And it is McCory's triumph that we sympathise with her at all.

Powerful stuff and well worth seeing.
Posted by overyourhead at Friday, July 18, 2014