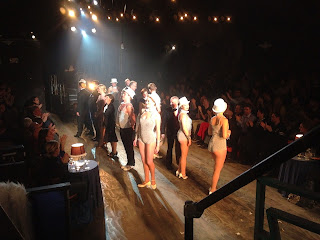 Last Saturday Stu and I went to see the musical Victor Victoria at the Southwark Playhouse in London's not so glitzy London Bridge Quarter.

Based on the fabulous Blake Edwards film of 1982 (which in turn is a remake of a 1933 German film) it tells the story of a down on her luck singer in Paris who shacks up with a gay impresario to dress up as a man and then impersonate a woman. The ruse is a hit and they become the toast of the town. Until that is cupid comes knocking in the form of King Marchand.

The show carries over many of the musical numbers from the film while adding many more. The only notable omission is The Shady Dame From Seville. Henry Mancini sadly never lived to see his new songs live as he died before the show opened on Broadway in 1995. The Southwark Playhouse is great. It maintains all the elements that made the film such a hit. It's well acted, well sung and most of all very funny. The production is super. The many scene and costumes changes are done effortlessly and full marks to the director.

The great lines are still in it of course. The best coming from King's jilted hoofer Norma Cassidy.
"Oh King. Kiiiing. I'm hooorny.."
"Lock the door!"
"You think, you worry, you worry, you think. It's just a vicious ciircle!"
"You're gay? What a waste." "I can assure you madam, it's no waste."

Posted by overyourhead at Monday, November 05, 2012