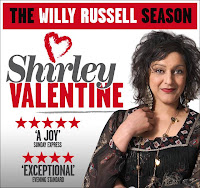 Last night Stu and I went to see Shirley Valentine at the Trafalgar Studios in London's glitzy West End. The one-character play starred the marvelous Meera Syal as Shirley, a middle-aged, working class Liverpool housewife. The play is a monologue focusing on her life before and during a transforming holiday abroad to Greece.
Originally performed at the Everyman Theatre in Liverpool in 1986, it reappeared at the Vaudeville Theatre in 1988 starring Pauline Collins and directed by Simon Callow. So successful was it they all transferred to Broadway and an award winning film was made in 1989.
Ms Syal was blooming marvelous. She acted her socks off, had us in fits of laughter and got the tone of the piece just right. Best line: "That's right, Millandra, I'm going to Greece for the sex! Sex for breakfast! Sex for dinner! Sex for tea! And sex for supper!"

Posted by overyourhead at Wednesday, September 22, 2010