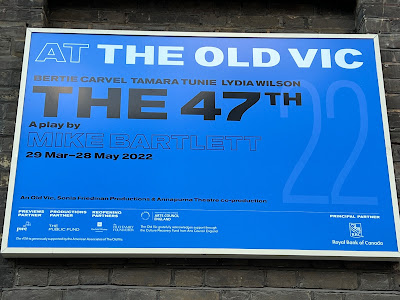 Last night Stuart and I went to see Bertie Carvel star as Donald Trump in Mike Bartlett's new play The 47th at The Old Vic in London's glitzy Waterloo.

Playwright Barlett, author of the acclaimed play King Charles III about the future of the monarchy, has taken on the Shakespearean figure of Donald Trump and imagines his near-future battle to regain the White House in 2024 in this new work written in blank verse – also known as unrhymed iambic pentameter.

"I never thought I would go back to writing Shakespearean form again, but then I had an instinct that Trump is like a Shakespearean king, so it felt like a match," said Bartlett. The 47th imagines Trump’s bid to win the 2024 US presidential election and his opponents’ efforts to defeat him and right-wing populism. Can it be defeated? And, on the other hand, what is the appeal of the thing Trump offers – which is clearly huge?

Bartlett's inspiration for The 47th stemmed from Trump denying the results of the 2020 election, and "seeing that the assaults on the Capitol and feeling the country was headed towards potential civil violence. Suddenly that power struggle is the story."

The 47th is directed by Rupert Goold, who also directed King Charles III. The play was clever, quite funny, but also perhaps a little too similar to various comedy sketches performed while Trump was President. We have seen much of this before. What is new is the part that could be played by his revolting (literally) children. The King Lear / TV's Succession parallels are plain to see.

Bertie Carvel is an all-in as an actor who fully embodies Donald Trump; he’s totally fearless in presenting him as someone on stage that you might not like at all. And we don't. But sort of admire his bravado and gall.

A good evening but not quite a must-see.
Posted by overyourhead at Friday, April 08, 2022