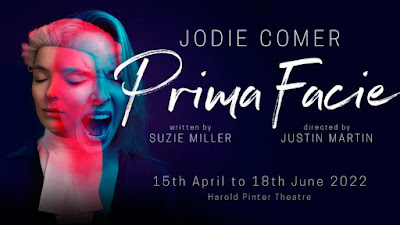 Sometimes a play comes along, a performance comes along that leaves you utterly breathless, totally speechless.

Author Suzie Miller's outstanding Prima Facie at the Harold Pinter theatre in London's glitzy West End is one such play. And Jodie Comer's West End debut in that play is one such performance.

After Comer's 100min masterclass, along with the entire auditorium, we jumped to our feet in rapturous applause with tears running down our cheeks. Brava! Brava!

Newly graduated, high-flying, brilliant defence barrister Tessa Ensler revels in the certainty of the law – defendants are either convicted or acquitted, everything is either black or white. It's not about guilt or innocence, it's about testing the accuser. Is there enough doubt in the claim? There is 'real truth' and 'legal truth'. Tessa only concerns herself with legal truth. What can be proven, or what can be cast in doubt. For barristers it's all about the win - not whether the accused did it or not. Then Tessa's world is shattered as she finds herself on the other side of the courtroom.

It's This Life meets I May Destroy You. Yes, that good.

Comer's authentic Scouse accent places her perfectly apart from those privileged enough to expect an education that will lead to a lucrative legal job. She's an outsider who is savagely turned upon by the legal system when her life dramatically changes.

Comer’s performance is absolutely stunning – funny, hugely physical (as she leaps on top of the office furniture) and heart-breaking as she contemplates a legal system that has been devised by men at the expense of women.

A place on 2023’s Olivier Award shortlist for Best Theatre Actress beckons as would a Tony Award too if it transfers to Broadway which it surely must. An absolute triumph.