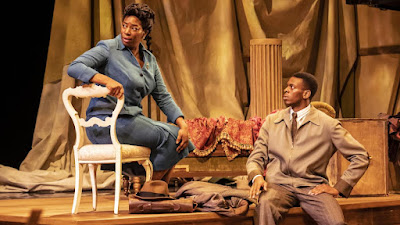 First staged over 60 years ago, the piece depicts a multi-racial cast all backstage tackling a clumsily worthy Broadway melodrama about racism while their white director Al Manners (Rory Keenan) goes on a power trip; we see the characters squabble, miscommunicate and bond while rehearsing their show.

Wiletta Mayer (played superbly by Motherland's Tanya Moodie) is a talented black actress. She starts out as a woman who gets to rehearsals early, just so she can be alone with the stage. And indeed, her career thus far has also been an apprenticeship in how to act around white people – always laugh at what they say, don’t act as clever as you really are. She imparts this knowledge to rookie castmate John (Daniel Adeosun) who arrives a little later and who will be playing her son.

Ultimately, it's the gifted and passionate Black actors that are being held back by a predominantly white theatre world.

The humour, like in all good satire, is fierce, naked, and uncomfortable.

And then, mid-play, we are brought up short. In a speech about witnessing a lynching as a young boy, Cyril Nri as older cast member Sheldon brings the audience to a standstill. You can hear a pin drop.

This encourages Wiletta to ignore her own advice of white appeasement and challenge the director's interpretation of the play within the play. However, she finds that her arguments to tell the truth of the story are constantly dismissed by Manners. Her arguments about the play fall on deaf ears - “you’re great until you start thinking”, he says. After her frustrations have become overwhelming she finally she decides to act. She delivers an extraordinarily furious speech about the handful of racist stereotypes she’s had to play in the past.

Written in 1955, the year the Montgomery bus boycott began, Trouble in Mind is funny, startling and has an incredibly modern-feeling.

Backstage is brought lovingly on stage by Rajha Shakiry’s set and Elena Peña’s sound design – we get the battered old piano, the cavernous echo of the back door closing. The rehearsal room lights the touch paper for a set of fascinating power dynamics.

If you like to be challenged, and to laugh all in one night, this play is great - and it makes for an unforgettable night.
Posted by overyourhead at Monday, January 24, 2022