Best of Enemies @ The Young Vic “A man should never turn down two things. Sex, and appearing on television.”... 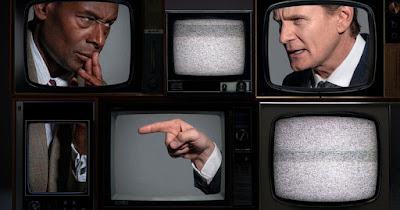 Last Friday night Stuart and I went to see the electrifying Best of Enemies at The Young Vic in London's glitzy Waterloo.

“A man should never turn down two things. Sex, and appearing on television.”

These two US political commentators are not only bitter rivals but diametrically opposites politically so when they go head to head in a nightly political televised debate on struggling ABC News sparks fly.

Graham is a political playwright at the top of his game so even though at first the USA and the 1960s might seem a country and an era both quite distant to us, the subject of a deeply divided country, a recent unpopular foreign war, a powder keg of domestic politics, and the wounds of all too recent racial hatred are as relevant here today as they were back then.

Harewood's transformation through the play is particularly remarkable. His Buckley starts as a stiff, impassive man whose emotions are only betrayed by a twitchy half-smile into a cocky, confident media performer who is only undone when national events overtake him, and he cannot contain is underlying fury when Edwards's Vidal gets the better of him.