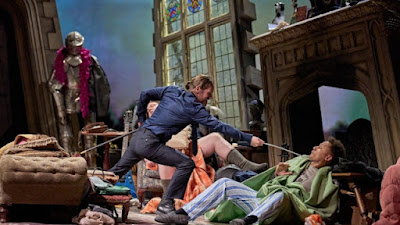 Sometimes you go and see something that is just crap. That, dear reader, sums up what we saw last night. People were snoring, bored walk-outs at the interval, comedy that was 'laugh-at' and not 'laugh-with'.
Moira Buffini’s new play Manor at the Lyttelton Theatre was just dire. Nothing glitzy about it.
It tried to be all things to all men. Sadly it failed on every level. A weak satire, a misfiring haunted house story, a groaning farce, a pointless murder mystery that doesn't have the courage of its convictions, a disaster of a disaster movie, a sub-Albion treatise on a bygone era of Englishness, a story of the Far Right that left much to be desired, a bunch of unearned offensive racist dialogue, a barely awake attempt at woke politics, a pointless gay outing, and an even more pointless (blunter?) lesbian kiss, oh and acting so hammy we should have all been served with apple sauce as we came in to the auditorium. It was toe-curlingly bad.
Unconvincing storytelling. Clumsy comedy. No chemistry between any of the leads. A waste of everyone's doubtless talent. Boring. Avoid.
Posted by overyourhead at Friday, November 26, 2021