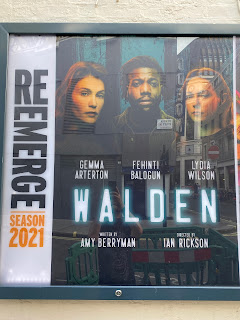 Set in the (not too?) distant future in a remote timber cabin somewhere in north America it stars Gemma Arterton (Stella) as one of two identical twin sisters (the other, Cassie, played by Lydia Wilson) who are as competitive with each other as they are for their deceased father's approval. Not only that, but they are now both struggling for the affections of Arterton's new love Bryan (played by Fehinti Balogun).

Like their late father, both women work for NASA trying to help colonise both the moon and Mars. Colonise is trigger word here that resonates with Bryan who is black and very quick to point out the imperial overtones of NASA's plans. Bryan is an Earth Advocate; 'let's fix stuff here before rich people start flying off to colonise another planet.'

It is a 100-minute play packed with ideas, the central conflict being about humanity’s future: should we be spending billions of dollars on colonising space or should we spend these resources on creating carbon-neutral environments on our own planet?

For Cassie, and NASA, it is already too late to save Earth, a point emphasised by news of a mega-tsunami that has buried Sri Lanka.

For Bryan, whose movement of like-minded citizens is reclaiming large tracts of the United States from climate disaster, it is never too late.

Stella is torn between the two.

We enjoyed it; great to be back in the West End. But although the play was good, it felt a little underpowered. The simple equation of Conflict = Drama felt somewhat unsolved; not enough of the former and so precious little of the latter. 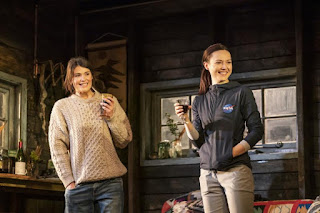 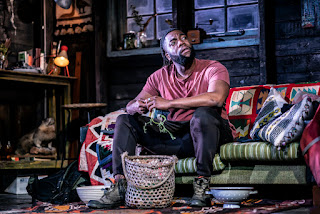