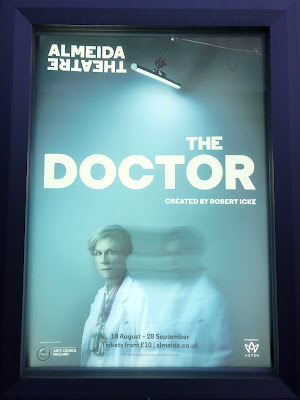 Last Friday night Stuart and I went to see The Doctor at the Almeida Theatre in London's glitzy Islington.

Based up on Arthur Schnitzer's Professor Bernhardi it has been freely adapted and directed here by Robert Icke.

The play stars Juliet Stevenson as a rather pompous doctor working in an institute who denies a Catholic priest access to a dying patient to conduct last rites.

The play then centres around three things - the rights and wrongs of that decision, the power politics at the institution, and the general conflict between medicine and religion as played out in the court of public opinion - especially on social media.

The play also toys with we, the audience's, own biases and expectations. There are dramatic twists aplenty - not least in the colour-blind casting and gender-blind casting.

The whole cast are excellent - the tension throughout is palpable - although the fight between religion and medicine perhaps seems a little stale these days in the UK. That said, it probably speaks volumes to the pro-choice/pro-life conflict that continues on the other side of the Atlantic.