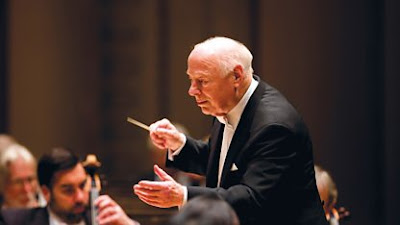 Last night Paul treated me to a night at the Proms to see Bernard Haitink, who turned 90 in March, conducting the Vienna Philharmonic in Ludwig van Beethoven's revolutionary Piano Concerto No. 4 in G major and Anton Bruckner's Symphony No. 7 in E major at London's glitzy Royal Albert Hall.

Perfectly performed by pianist Emanuel Ax as the soloist, the Concerto had us on the edge of our seats. Beethoven’s revolutionary piece was written by the composer as his own farewell to the performing stage.

A farewell of a different kind ran through Bruckner’s Symphony No. 7. Completed shortly after Wagner’s death, the work’s heartfelt slow movement, with its poignant closing elegy, pays homage to the man and mentor Bruckner described as his 'dearly beloved Master'. One composer’s heartfelt tribute to another. Sensational.
Posted by overyourhead at Wednesday, September 04, 2019