Quiz Night @HighburyL "Great fun. How did we do? Well, we didn't come last!" #QuizTeamAguilera #PubQuiz 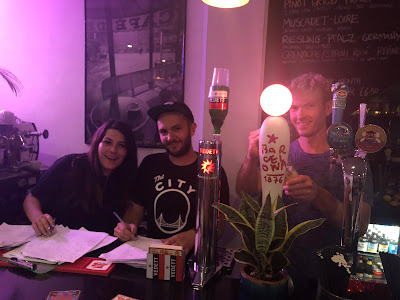 Liz was calling out the questions, Andrew spinning the tunes, and Ryan pulling the pints. It was great fun.

There were loads of inventive rounds involving eating, making stuff and guess the intro.

We ordered pizza to be delivered and have a rare old time.

We were given three cups of Pringles to taste

3. What name is given to the provencal vegetable stew that originated in the French city of Nice?

2. Which country created its own time zone in 2015 in an apparent return to life before Japanese rule? lt has since abandoned this move.

If you could stop time what would your team do? Make it out of Playdoh.

We were played the intro to each summer-themed song

1. Walking on Sunshine - Katrina and the waves

3. Here Comes The Sun - The Beatles

4. Everybody Loves The Sunshine - Roy Ayres

Posted by overyourhead at Wednesday, August 08, 2018