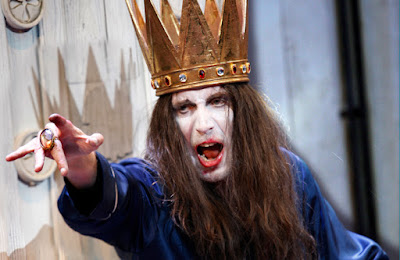 Ionesco, that French-Romanian titan of post-war drama, acclaimed architect of such avant-garde classics as The Killer, The Chairs and Rhinoceros, is only now receiving his first National Theatre production. And it is 2018. Well over two decades since his death in 1994. Utterly absurd... as is the play, of course. But perhaps not quite absurd enough for my taste.

Exit the King's original French title is "Le Roi se meurt" that literally translates as "The King is dying" which perhaps explains the plot somewhat more clearly and less poetically than the English version. The play is a fairly straightforward affair about a king (Rhys Ifans) who is in denial of his own death and refuses to give up power.

His first wife Queen Marguerite (Indira Varma) tries to make him realise what is going on. His second wife Queen Marie (Amy Morgan) seems to be in an equal state of denial as the king. The royal doctor (Adran Scarborough) and the guard (Derek Griffiths) complete the pack of cards.

In the play, Ionesco insists that death, for each and every one of us, is the loss of our everything – all our earthly possessions and powers. It is a simple point and a profound one, though not one that sustains an hour and forty minutes of overblown verbosity and polite, pantomime clowning that hits the same notes again and again. The initial absurdist politics soon gave way to a meditation on the meaning of death, of letting go, of giving up, of realising it is not really all about you. Some people in the audience were developing their own exit plan, heads bobbing in a way that signalled sleep was nigh.

One for the die-hard Ionesco fans I feel.
Posted by overyourhead at Friday, August 17, 2018