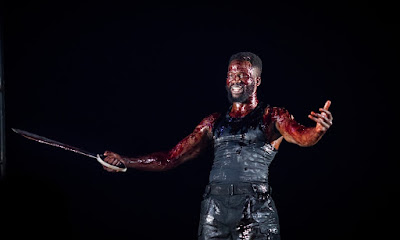 Last Saturday night Stuart and I went to see The RSC production of Coriolanus at the Barbican Theatre in London's glitzy Barbican Centre.

Shakespeare likes a self-damaging protagonist, and while not as horrifying as Macbeth or as appalling as King Lear, Coriolanus sure knows how to stab himself in the foot.

Being a master on the bloody battlefield doesn't necessarily make you the master in the political field and so when Coriolanus is forced to give up the sword and talk to the plebs he has little patience and even less support. His temperament gets the better of him and he is banished from Rome.

For revenge he decides to side with his old adversaries the Volscians invaders - whose leader Aufidius (James Corrigan) welcomes him with almost homo-erotic glee. Their plan is to retake Rome by force.

Only when our hero's power-hungry mother Volumnia (a sleekly persuasive Hadyn Gwynne) succeeds in stopping him Coriolanus’s fate as a traitor is sealed.

Directed by Angus Jackson with Sope Dirisu in the title role the night is well put together but ultimately way too long. Even though an hour has been cut from the original play the straight-forward plot still leaves us sitting through endless to-ing and fro-ing about how Coriolanus despises the populace. The plot simply plods.

A couple of famous lines stand out though:-

"What is the city but the people?"
Posted by overyourhead at Thursday, November 23, 2017