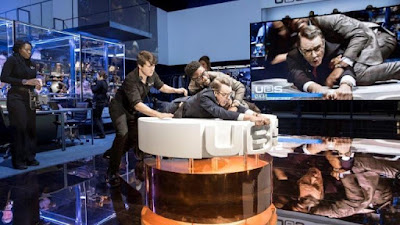 Last night Stuart and I went to see Network at the National Theatre's Lyttelton stage on the glitzy South Bank.

And what a disappointment it was! We had had such high hopes and the many five star reviews looked so promising too.

As a broad satire Network fires at several broad targets (TV, corporate commerce) but broadly misses. And it treads such a well-trodden path as to be boringly trite in its attempts. It imagines a world where TV news becomes a branch of show-business, where profit margins dictate editorial content and where nation states are subordinate to "a college of corporations". Er, yes, we already live in that world. But, it treats these facts are revelations worthy of a messiah.

The play's set is getting most of the critical attention though. Those familiar with van Hove's previous staged works will recognise his signature on-stage video cameras and large screen close-ups but here we also have to contend with an on-stage restaurant complete with patrons to distract us too, a make-up / dressing area, a TV production room, and a four-piece Kraftwerk-lite band. It all rather scrappy and annoyingly distracting.

Granted, if the sheer sensory cacophony we experienced is the point of the piece it is a point well made. It is just that ultimately, this overload to the senses makes any other messages from the piece too hazy to be effective. The fine acting gets lost in the noise. So if the idea is that "the noise" is the problem in modern media it didn't need to take two hours to convince us. We get the point 2 minutes in.

And major plot holes abound, there are too many characters to follow, and that toe-curling awkward audience participation… I could go on... And the anti-Arabic rant mid-show was frankly racist.

Network is a glowing, short-circuiting mess. It is a giant, chaotic dance of man and video that amplifies a well-known two-pronged message. One, that populism can be a volcanically destructive force that can obliterate the "bullshit" that we call society with frightening speed. Two, that the “bullshit” wins in the end.

So if this merciless and resonantly topical vision of the way modern media fragments our attention with relentless content works at all, at two hours, it outstays its welcome.

Other opinions are of course available.
Posted by overyourhead at Friday, November 17, 2017