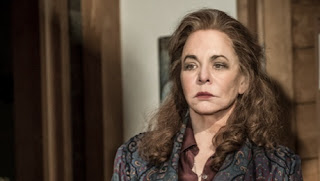 The return of Stockard Channing to the London stage after an eight-year absence is to be welcomed and was a pleasant way to spend a Thursday night in wet London. As Rizzo in Grease might say, there are worse thing you could do... OK, that's a bit unfair.

Apologia means a formal written defence of one's opinions or conduct. And that is the basis of the play starring Channing's perfectly cast Kristin, a former 1960s radical who sacrificed the wellbeing of her two sons for her political principles.

The debate about whether political idealism trumps domestic responsibility is well handled though there are some gaps in credibility and the reasons for Kristin’s behaviour are never quite unearthed. But director Jamie Lloyd delivers a satisfyingly bumpy ride and it is hard to take your eyes off Channing

In fact Lloyd’s production is strongly cast all round. Joseph Millson doubles very effectively as both of Kristin’s sons, the angry Peter and the sad Simon. Laura Carmichael is excellent as Trudi, catching both the character’s naive good nature and the rising inflexions of a native American. Freema Agyeman is admirably spirited as the unrepentant soap star and Desmond Barrit, as a gay dinner guest, movingly suggests that behind the protests and the demos of the 60s lay a concern for people.

Such a story of complicated, damaged people and relationships, steeped in futility and regret; Apologia must surely be a conscious tribute to Chekhov. As soon as it is stated that the phones of Claire and Kristin look alike, the audience knows that one will receive a call intended for the other; a digital update of Chekhov’s gun. That said, the story was rather heavier going than much Chekhov - especially as things dragged somewhat in the second half.

Still, it was great to see Stockard Channing back on the London stage and it was a very enjoyable evening. Peachy keen, jellybean.

As a footnote, I do have to mention her face though. She has had way too much work done. Way too much. But does call to mind some advice her character Rizzo gave Olivia Newton-John's Sandy in 1978's Grease film, "Think of it this way, if she screws you up she can always fix your hair so your ears don't show."