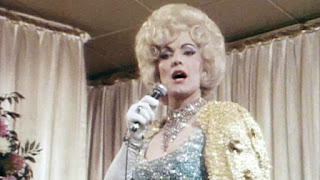 Last Friday night Darren, Stuart and I went to see a drag double bill at the BFI on London's glitzy South Bank. The two films were followed by The Glory Takeover Afterparty in the Blue Room.

Each film was unique. The first called Black Cap Drag was a rare surviving record of a 1960s drag performance at Camden's must missed Black Cap pub. Drag queens Shane and Laurie Lee performed and discussed their craft in this homemade documentary by Richard Benner (who went on to make Canadian drag film Outrageous! in 1977). It was great show and some of their jokes still survive today ("thank you for that warm hand on my entrance" etc.)

The second film was made in 1969, called What's a Girl Like You...,and shot partly in the Royal Vauxhall Tavern and partly in a Northern club. And boy did these boys take their craft seriously! The frocks might have been smart but the wisecracks smarter. These guys sure knew how to entertain. But many of these transvestite showmen wanted us to be very aware that they were not all gay and they were just in it for the money. Gay, dear? Me, dear? No, dear! That said, some even took to female hormones to produce breasts to complete the illusion. It was a mixed up world. Beautifully made film though that made no judgments but just showed life the way it was.
Posted by overyourhead at Tuesday, August 08, 2017