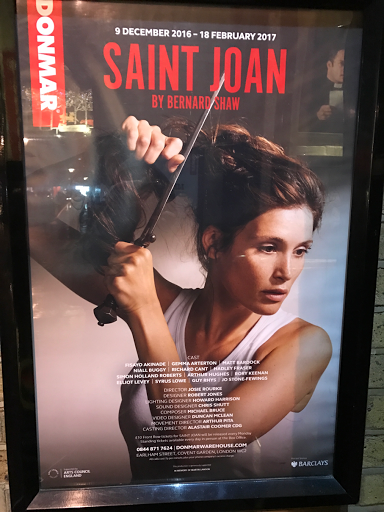 Synopsis: There had been a run on eggs and milk and farm girl Joan is hearing voices. Arterton is stylish and engaging as the doomed Joan of Arc.

Bernard Shaw's electrifying classic Saint Joan has been reborn by Josie Rourke here at the Donmar as a modern-day news event. We have large screens bursting into life with breaking news stories about tumbling egg and milk production alongside political scoops and financial machinations.

The core of the story remains the same however. The English are at war with the French and have occupied much of northern France. From the villages comes a girl who appears to hear the voices of St Catherine and St Michael telling her God's word to rid the country of these annoying foreign invaders. People flock to her side and she has many military successes even restoring the Dauphin to the French crown.

Soon she overreaches herself and her iconic status as communicating with the Almighty threatens the Catholic Church who aren't so keen on someone bypassing their own monopoly with God. There will be sparks; this town ain't big enough for the both of us.

Starring the luminescent Gemma Arterton in the titular role the production is a compelling though perhaps not a triumphant one. There is a great supporting cast with many familiar faces however for a play about a woman being burned at the stake the production never really catches fire. It is all very arch and wordy as you might expect from Shaw but with little passion.

Only Arterton's final speech before she goes to the flames has much spunk.

Recommended (if you like Gemma Arterton - which I do - and you like modernist twists - which I only kinda do)
Posted by overyourhead at Tuesday, January 10, 2017