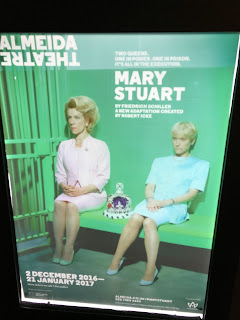 Synopsis: Two queens. One in power. One in prison. It's all in the execution. Fantastic show.

Set over one day and taking almost as long to perform(!) the play tells the story of two queens - Elizabeth and Mary. One English and one Scottish. One Protestant and one Catholic. One a bastard and one a true blood. One cursed with doubt and one blessed with a heart.

The Catholics are plotting to overthrow the Protestants (as the Protestants did them) so  Mary as their figurehead is imprisoned - nominally for the murder of her husband Darnley, but actually due to her claim to the throne of England held by Elizabeth. Elizabeth doesn't know what to do with her; she wants to get hid of her but doesn't want to make her a martyr so hesitates over signing Mary's death warrant. It is a hestitaion that may cost her dear.

Elizabeth eventually agrees to meet Mary but things don't go well and after Elizabeth is stabbed suddenly everything moves very, very fast... Mary has to die. Or does she?

Anyone with a cursory knowledge of history will know how it plays out but in the end we are left with one Queen. Alone. Heavy weighs the crown.

Playing both Elizabeth I and Mary Stuart, Juliet Stevenson and Lia Williams trade the play's central roles, decided at each performance by the toss of a coin. We saw Stevenson play Mary and Williams play Elizabeth and fantastic they both were in their roles.

Stevenson's Mary used her earthy charms, she pleaded, she scorned, she fort against the bars of the prison that held her. She was the heart of the play.

Williams's Elizabeth was full of doubt about doing the right thing. She hated the duty that had enslaved her. She understood much but over-thought everything. She was a mass of contradictions. She was the head of the play.

Posted by overyourhead at Thursday, January 05, 2017