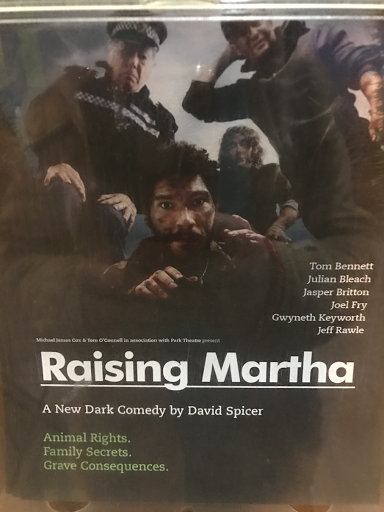 Synopsis: If Joe Orton was still alive and writing plays, this would be one of his less notable ones. Lots of gross-out jokes but a little dated all the same.

The titular Martha here is the long dead matriarch of a family of frog farmers, whose bones are stolen by militant animal rights activists for the purposes of blackmail. Though the plot touches on themes of extremism, civil liberty, and the human talent for cruelty, Spicer rarely digs deeper than the first available punchline. For all that, his dialogue has a pleasing verbosity, regularly punctured with asides, and peppered with slow burning jokes, which pay off in the play’s closing moments.

Director Michael Fentiman gives the show a busy, physical edge, ramping up the slapstick sight gags but also adding occasional, awkward movements that feel arbitrary. As bickering, bumbling activists Marc and Jago, Tom Bennett and Joel Fry show an admirable willingness to throw themselves around in their underpants to get a laugh. By contrast, Jeff Rawle’s stolid country copper Clout oozes opportunistic unpleasantness, circling the crime scene like a vulture as he delivers his unreliable narration.

Rebecca Brower’s multi-level set features transparent screens that provide a glimpse into a greenhouse packed with marijuana plants. Meanwhile, a section of the Park Theatre’s mezzanine has been converted into an open grave, which characters fall into or pop out of with great regularity. Beneath moody violet strip lights, the space gains a tense, expectant atmosphere that the production never quite capitalises on.

Recommended? If you like your comedy to be both broad and black this might be this how for you.

Posted by overyourhead at Friday, January 20, 2017