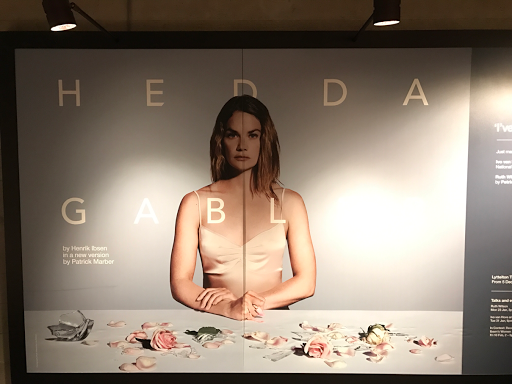 Synopsis: Great production of a narrowing play. Ruth Wilson is excellent as mad, bad and dangerous to know Hedda.

Ibsen can be a bit downbeat at times and even depressing as we wait for the inevitable in the Norwegian's plays - a major character's suicide. Not quite so here however. It was a night of fraught nerves and violin string-tight emotions.

Ruth Wilson's Hedda was coquettish, playful, and skittish but ultimately a nasty piece of work. For Hedda Gabler is a study of a woman driving for power and control. Recently married to a brilliant but boring academic she feels helplessly trapped and seeks to reject her new life spreading before her. She taunts ex-lovers, bullies her husband, manipulates old school friends, and seems to hate the fact that she is now pregnant.

She soon comes a cropper though as giving alcohol to a recovering alcoholic, a loaded gun to a depressive and blackmail material to a unscrupulous family friend was never going to end well.

An excellent production helped in no small way by Chukwudi Iwuji's Eilert Lövborg and Rafe Spall's Judge Brack who were both particularly compelling.

Recommended: If you like a bit of depressing Norwegian self-destruction.

Posted by overyourhead at Wednesday, January 11, 2017