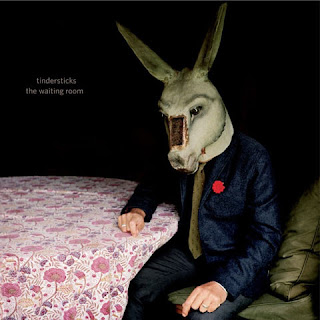 Stuart Staples and the Nottingham songsters were there to promote their new album The Waiting Room. The first half of the gig was a sort of 45 minute greatest hits package with each dream-state song receiving more rapturous applause than the last.

Then in the second half the guys performed their new album in its entirety - each track being accompanied by its own short film. The music was excellent, the short films were brilliant.

Highlights for me were the pounding driving film to Were We Once Lovers? and the marvelously melodic We Are Dreamers!

As an encore we were treated to another 20 minutes of the bands hits.

First half:
Johnny Guitar (the Peggy Lee cover)
Keep You Beautiful
Medicine
She's Gone
Boobar Come Back to Me
The Other Side of the World
Sleepy Song
My Oblivion

Second Half (each track performed in front of its own film):
Follow Me (video projection)
Second Chance Man
Were We Once Lovers?
Help Yourself
Hey Lucinda
This Fear of Emptiness
How He Entered
The Waiting Room
Planting Holes
We Are Dreamers!
Like Only Lovers Can
Closing Titles aka Follow Me

Encore:
Show Me Everything
Slippin' Shoes
A Night So Still