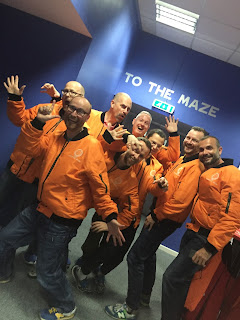 On Saturday night Oliver, Marcin, Steve, Jorge, Stuart, Luca, Stuart and I went to do The Crystal Maze game in London's glitzy Angel.

Lovingly recreated Aztec, Industrial, Future and Medieval worlds lay before us. And it was bloody brilliant!

The production values were very high with a great deal of attention paid to detail, the games were fiendish yet fun and the Maze Masters got the tone just right - telling jokes, giving clues and keeping the excitement levels at 100%

As we ran from world to world we each got to play two games - choosing from physical, mental, skill or mystery. If we solved the clues or climbed the wall or whatever we then unlocked one crystal. If one of us ran out of time and were locked in the room we needed to spend one crystal to release our team mate. Each crystal rewarded us with 5 seconds in the Crystal Dome grapping gold tickets at the end.

We beat all the other teams to get the most golden tokens but because we did so well they thought we must have been cheating so disqualified us just in case (!)

So technically, which is my favourite kind of truth, we won!

Well done boys! Start the fans!
Posted by overyourhead at Monday, May 23, 2016