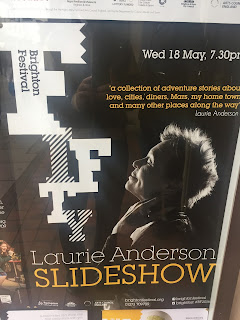 Last night Paul and I braved the Southern Trains strike to go down to Brighton to see the world premiere of Laurie Anderson's Slideshow as part of the Brighton Festival... at the Brighton Dome... in glitzy Brighton. Did I mention it was in Brighton?

As it turned out the trip there and back couldn't have been easier. Strike? What strike? The show itself however was less smooth.

We are both big fans of Laurie Anderson and would both travel a very long way to see her perform but this show was woefully under-rehearsed. Laurie kept referring to her written notes while umming and ahhing (erring?) Which was ironic as the theme of the show was Plan B - what to do when things go wrong.

All that said, the pieces that did work were great; the live video projection of the prisoners into the museum and the pillow speaker in her mouth turning her voice into a violin were of particular note.

Good show but (with some rehearsal) could be a great show.
Posted by overyourhead at Thursday, May 19, 2016