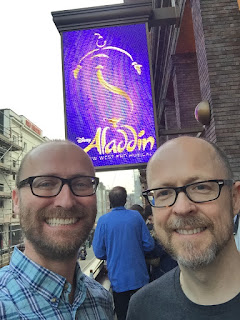 Last night Stuart and I went to see the London transfer of Disney's musical version of their 1992 animated film Aladdin at the Prince Edward Theatre in London's glitzy West End.

With music written by Alan Menken and lyrics by the late Howard Ashman, Tim Rice and Chad Beguelin this show was quite, quite brilliant; the score, direction, choreography, staging, lighting, design were all magnificent.

From the opening song Arabian Nights I was hooked. We were treated to a feast of colourful, whirling, dancing and singing characters that just took my breath away. By half time my face was aching from smiling so much.

Dean-John Wilson as a muscular Aladdin was fantastic, Jade Ewen as Jasmine a delight but the stand-out performance for me was Trevor Dion Nicholas as Genie.

This Genie was big, black and camped it up something rotten. He sang up a storm and basically upstaged anyone else who had the misfortune of being on stage with him. Marvellous.

Particular noteworthy production numbers were One Jump Ahead, Prince Ali and, of course, A Whole New World (complete with wobbly magic-carpet).

And although new song Proud of Your Boy brought a tear this old cynic's eye the stand-out number of the night (that had the audience on its feet and stopped the show) was Friend Like Me. Taking place in the glittering, golden Cave of Wonders it was simply wonderful. A real wow moment in a wow of a show.