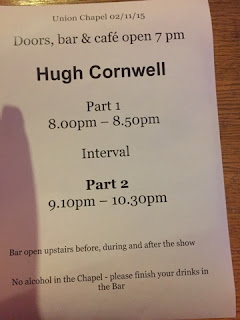 Last night my brother Simon treated me to a night out seeing Hugh Cornwell perform at the Union Chapel.

Hugh Cornwell is perhaps most famous for being the lead singer with The Stranglers up until 1990. He has since gone on to have a very successful solo career.

With just him on stage with a single guitar HC delighted us with a song from each of the first ten Stranglers albums followed by a gambol through some of his solo work before ending with a few Stranglers classics.

He was in fine voice, strummed up a storm and interspersed the songs with some funny anecdotes.

The set list (or most that I can remember):=