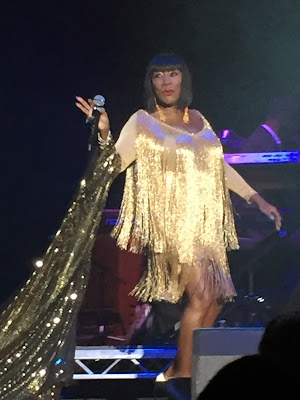 Last Sunday night Darren, Rachael, Stuart, Paul, Stuart and I all tootled along to see the Great Voices of Soul show at SSE Arena in unglitzy Wembley Park.

The show had originally meant to have been staged back in the spring and to have included James Ingram but it was cancelled at the last minute.

This relaunched show finally rolled into town and certainly was packed with stars. Perhaps a little too packed at times though as some of the acts sang just a couple of songs before they were then whipped off stage by the promoter as if by some giant shepherd's crook.

First on stage was Loose Ends (of Hanging on a String fame) and they sounded good. Then Rose Royce's Gwen Dickie was wheeled out - quite literally in this case as she was in a wheelchair from having done her back in. She asked us Is It Love You're After? and then gave us a good Car Wash. She was in great voice.

Up next was M'Lissa Morgan who I was less familiar with but she sparkled and spangled her way on to the stage in a disco ball of a dress and certainly had the lungs and chops to belt out some powerful songs that got the crowd dancing.

The final act of the first half were Soul II Soul complete with original lead vocalist Caron Wheeler. They had dancers... singing dancers... violinists dancers... you name it. And Jazzie B and Caron W really sang up a storm. Naturally Keep on Movin' went down very well as did Back to Life (However Do You Want Me) but with the bass turned up to 11 it did rattle our teeth somewhat.

After a short break we were back with The SOS Band. And they were brilliant. It was a high octane performance with so much energy on stage you could have powered half of the National Grid with it. They danced, they sang, they danced some more. Minor hit The Finest went down well but it was Just Be Good To Me that got the crowd on their feet dancing and crying out for more. And surprise special guest was Alexander O'Neal!

The penultimate band of the night was The Whispers who frankly were a bit of a disappointment. Dressed in what looked like thin blue pyjamas they tried their best but sadly didn't really have the songs to back it up. And The Beat Goes On and It's A Love Thing being the only songs of note.

The girl put on a great show though using up the entire stage, chatting to fans in the front row, waving to people right at the back and throwing her shoes about. She danced in a way that belied her 71 years too belting out hits such as On My Own and of course the iconic disco song Lady Marmalade to send us all home happy.

A great - albeit long - night.
Posted by overyourhead at Wednesday, November 18, 2015