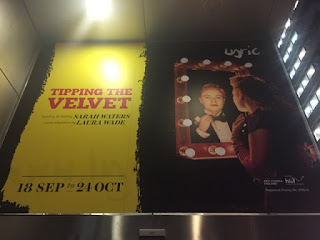 Last Friday night Stuart​ and I went to Tipping the Velvet at the Lyric Theatre in not particularly glitzy Hammersmith.

Based on the wonderful Sarah Waters novel the story tells of Nancy (Sally Messham) and her journey from Whitstable oyster girl to celebrated West End drag king to Hampstead lesbian-sub to half of a Bethnal Green socialist power-couple.

It's a great story that has in fact been retold on TV quite recently but what elevates Lyndsey Turner's new production up to the stratosphere is the simply genius idea to set it all up as an Old Time Musical show. Each scene is told as a act coming on stage to perform a turn. The MC chats to the audience and the band are at the front of the seating area and regularly get up on stage to be part of the action. The actors regularly break the fourth wall and sing old fashion styled versions of modern (and post-modern) pop songs. It all works beautifully. In fact the genius of the idea works so well at times it threatens to (but never quite does) overwhelm the story.

I shall remember the abattoir pigs singing Bronski Beat’s Smalltown Boy for quite some time. And the lesbian sex scenes all take place up in the air which managed to be both laugh out loud funny and sexy - a tough act to pull off. But they do it brilliantly.

Apart from Sally Messham the other stand-out performance is Laura Rogers as Kitty. 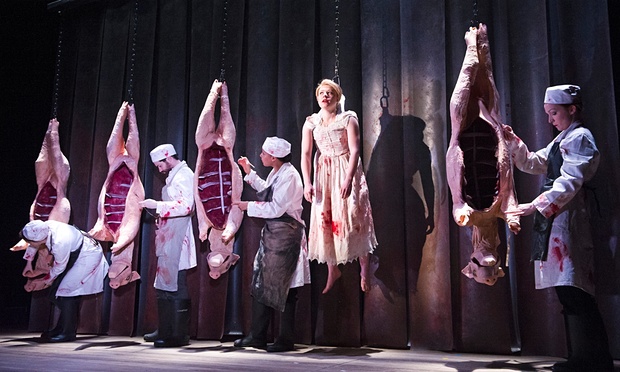 Posted by overyourhead at Wednesday, October 07, 2015