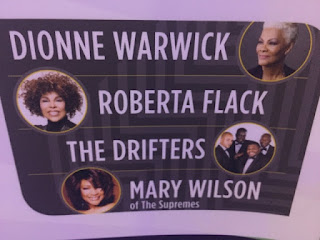 Last Saturday night Stuart and I went to see Legends Live at the Wembley Arena in the distinctly unglitzy Wembley Park.

Mary Wilson (off of The Supremes) was up first. Her all too brief half-hour set definitely had the hits plus a touch of Rolling Stones thrown in. She was in great voice, sported a blue sparkly dress and had a good stage patter which got us all in the mood.

The Drifters were on next. The latest four members (there have been 38 so far) were a bit of a karaoke band to be honest. Sure they played their hits but covering U2 Vertigo was perhaps a bit of a misstep. The crowd seemed to enjoy it though.

After the interval Roberta Flack was wheeled on. Looking a bit weird and acting bat-shit crazy seemed to be part of her act as far as we could tell. Her two backing singers outshone her own vocals though. Not that she was terrible you understand but she did that sing-along-to-my-own-songs that way that Chaka Khan does. She rather murdered Killing Me Softly too - and not in a good way.

Last up was Dionne Warwick who after a very long technical wait finally wafted onto the stage. Her voice was very frail and although it was good to see and hear her I can't help but think she won't be touring for much longer. She sang (wailed?) all the hits but the woman behind us kept tutting at each croaked note. Towards the end of her set everything went quiet and Dionne sang out, "What's it all about... (pause)…" But before she could sing the word "Alfie" the woman behind us muttered right on cue "Oh, Christ!" Very funny.
Posted by overyourhead at Tuesday, October 06, 2015