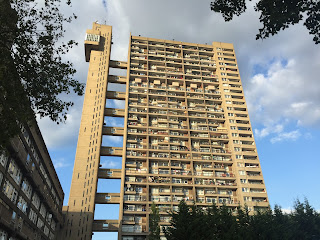 Last Saturday Stuart and I took an architectural tour of some of London's most well-known and celebrated Brutalist buildings, towers and estates. The tour was run by The National Trust and The South Bank Centre and our lead host for the day was the gorgeous and well-informed Tom Cordell, film-maker and expert on social architecture and modernism, and director of Utopia London. He was joined by Joe Watson, London Creative Director, National Trust, and author of the guidebook accompanying the Brutal Utopias project.

Starting at the South Bank with the majestic Queen Elizabeth Hall, Purcell Room and Hayward Gallery we journeyed by Green Line Routemaster bus to the Barbican Estate by Chamberlin, Powell and Bon and then on to the 'other' Festival of Britain site (the Lansbury Estate in Poplar) which included the Bralfron Tower, the Brownfield Estate, and Chrisp Street Market. We then walked around Neave Brown's Alexandra Road Estate before concluding our trip at Ernö Goldfinger's iconic Trellick Tower.

Brutalism was largely a mixture of idealistic social dreaming and the practical realties of post-War living. And main ingredient used in this mix was concrete. Lots of it.

The tour was fun, illuminating and strangely political. Of course housing is, and always has been, a hot political issue and any society's attempts to solve the housing needs of an ever increasing population requires the close cooperation of government agencies (both national and local) and urban designers working with informed architects. This cooperation was common place post-War but in these neo-liberal times has somewhat fallen by the wayside.

Brutalism's architects were informed by a utopian vision of space, function and the need to produce the right density of good quality housing in what were then largely run-down industrial cityscapes.

Initial Brutalist mistakes have now by and large been rectified. These mistakes included having no concierges on site, the constabulary not wanting to police the estates, long elevated runways through estates allowed ne'er-do-wells to escape unchallenged and by not maintaining the exterior of the concrete it was allowed to absorb water to rust the steel reinforcements.

Ultimately whether the Brutalist vision failed or not may depend somewhat upon your opinion of the main material they used to achieve their aims i.e. concrete. It's a marmite material for some. We asked a few residents of what they thought of their concrete homes. Most loved them.

Great tour. Well done, National Trust. A long overdue recognition of what Brutalism did for Britain.
Posted by overyourhead at Thursday, October 01, 2015