The Motherf**ker with the Hat... 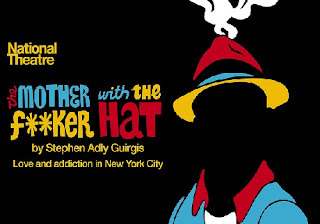 Last night Stuart and I went to see the play that dare not speak it's name... The Motherf**ker with the Hat (oh let's give it it's proper title The Motherfucker with the Hat) at the Lyttelton Theatre on London's glitzy South Bank.

And giving it it's proper title is what we must do because the description as, "a high-octane verbal cage match about love, fidelity and misplaced haberdashery" doesn't even begin to describe the level of swearing that this play contains. It f-bombs, it s-bombs, it c-bombs.. like a motherf**cking trouper.

But the key thing here is it's not swearing for swearing's sake. This is how these characters talk. How they communicate. These are all recovering addicts - some more recovering than others - whose Shakespearean tale of messy misdeeds, mealy-mouthed mistresses and monumental misdirection requires, no *demands* the use of the modern poetry of the streets.

The swearing makes the dialogue seem both raw and genuine and also provides some quite hilarious zingy one-liners.

Here is one example (beware, swearing ahead.) One character makes a quite off the cuff remark saying, "I didn't fuckin' do da shit, don't put da shit o' me, I'd rather spit in a nun's cunt." You get the idea.