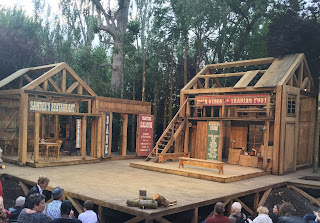 Last Friday night Stuart and I went to see Seven Brides for Seven Brothers at The Regent’s Park Open Air Theatre in London's glitzy Inner Circle of The Regent's Park.

This "classic" musical (actually only written in 1982) is based on the 1954 Oscar winning Howard Keel film which itself is based upon abduction and rape crimes committed back in Roman times - The Rape of the Sabine Women. And it seems times have not changed much since 750 BC.

Basing your musical upon marriage by capture was always going to be a problem. However high your high-kicks are boys and girls.

West End musicals never have shied away from difficult or awkward material; The Producers (Nazism), Sweeney Todd (cannibalism), Rent (AIDS) but these shows were about their subjects - not actually advocating them. For all its pussy footing about Seven Brides for Seven Brothers is about, and revels in, bride kidnapping.

It is a deeply sexist, toe-curlingly offensive, at times homophobic piece which no amount of revisionism or post-modern arching of the eye brow can hide. Songs without a hint of irony have titles like "A Woman Ought To Know Her Place" and "Bless Your Beautiful Hide". Need I say more?

Don't get me wrong though, the Regent's Park stellar creative team of director Rachel Kavanaugh and choreographer Alistair David working together once again after 2013's five star production of The Sound of Music is a joy.

Laura Pitt-Pulford plays a charming Milly (as she did playing Maria in The Sound of Music) and Alex Gaumond impresses playing Adam who is fresh from the role of Beadle Bamford in the ENO's Sweeney Todd.

The problem is what it is, not how it is.

For me the misstep that the Regent’s Park Open Air Theatre have made here is in choosing this sexist material in the first place.