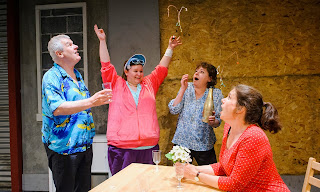 The other week Stuart and I went to see The Flannelettes at the Kings Head Theatre in London's glitzy Islington.

Richard Cameron’s new play attempts to combine the earnest treatment of serious social issues with some light-hearted musical pastiche. The various strands are each moderately successful on their own, but never really seem parts of the same play.

The director of a battered women’s shelter deals with the real issues and emotional confusions of her residents while looking after her mentally-limited niece, who is in danger of being sexually exploited by some of the same villains who beat their wives. Meanwhile, even the most sympathetic men in the community are limited by prejudices and practicalities that stand in the way of justice.

The girl’s one simple pleasure is fronting the titular amateur tribute girl group, so that rehearsals and performances of Motown classics punctuate the action. That’s really more than one play can handle, with the songs and the Flannelettes subplot particularly awkwardly shoehorned into the action.

The abused women’s stories, the girl’s vulnerability and the dark ironies limiting the good men each come across strongly, largely through the inherent power of the material, but even they have to compete, sometimes uneasily, for centre stage.

Director Mike Bradwell can’t fully disguise the script’s fragmented quality or the fact that squeezing so much in results in barely sketched-in characterisations.

Emma Hook captures the mix of innocence and petulance in the childlike young woman, but Suzan Sylvester as the shelter manager has little to play but harried exhaustion.

Despite the weighty material it's fun though.
Posted by overyourhead at Wednesday, May 20, 2015