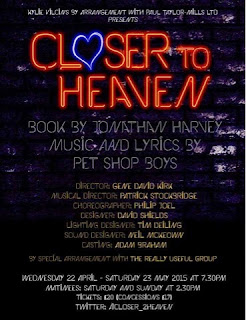 Last night Stuart and I went to see Closer To Heaven at the Union Theatre in London's not so glitzy Union Street in Southwark.

Written by Jonathan Harvey and with music by the Pet Shop Boys the show had a limited run at the Arts Theatre back in 2001.

This was a spirited revival of what is frankly not a particularly good musical. I like the Pet Shop Boys music they wrote for it a lot and listen to the show's original cast recording regularly but its story of clubs, drugs and coming out is sub-par, sub-Taboo and very dated (it was even back in 2001). The whole thing just needs a rewrite.

Having said that the show we saw last night was fun enough. The boys and girls wore very little, danced very well (in the very limited space the Union Theatre allowed them) and seemed to be enjoying themselves very much. The singing was another story though. It was pretty grim at times. With no microphones on the actors you couldn't hear the words and there were so many bum notes we almost offered them some Andrex. Shame really was the lyrics are quite good.

No, what the show needs is a rewrite and a production in a bigger venue which could transform it into a much better show. You up for it Boys?

This was the review I wrote back in May 2001 and I pretty much stand by what I said back then:
"So was it any good? To be honest no. I so wanted to like this. Bits were OK but I just never felt engaged. I never connected or felt any sympathy towards any of the characters - I just didn't care whether they fell in or out of love. Whether they lived or died. It had all the right ingredients - Pet Shop Boys' music, Jonathan Harvey as author, a cast and crew with a good reputation. But even my low expectations were sadly misplaced. Billie Trix (Frances Barber) plays an aging pop star with a past. In many ways she holds the whole show together as the confidante of the other leading characters. But despite punchy lines like, "Love? That was like Vietman. After a lot of protesting it ended in the Seventies" her Eartha Kitt growl and Gabriel looks began to grate before long. Her Billie's Babes were little more that Hot Gossip in day-glo. Things looked up a bit half way through the first half with the appearance of Bob Saunders (Paul Boughton) a thinly veiled Tom Watts character as a fat, gay, hideous record producer. But he was barely used beyond his first half success. The music was generally OK. The previously written PSB songs such as Shameless and Closer to Heaven sounded adequate live but just like Mamma Mia some songs were shoe-horned with amazing crassness into the plot. In Denial was a good example. Its reprise in the second half was only slightly better. The only moving part in the whole show was a dramatic rendition of Vampires by the father character Vic Christian (David Burt). This consisted of him singing stage right while the two main gay characters had sex in a bed naked stage centre. Sadly the rest of the second half was trite to the point of boredom. On the whole the show was too 'gay'. Not camp enough but too 'gay'. Homosexuality was not only a given of ever male character but their only characteristic. They had no other qualities. I can't see it running as a musical. A straight audience will find nothing to identify with. It'll close at the end of the summer at the latest. Closer to Heaven - your fifteen weeks of fame starts now.
Star Alert: Neil Tennant sat in front of us. I chatted to him a bit on the way out - he's going every night. Why torture yourself, love?"