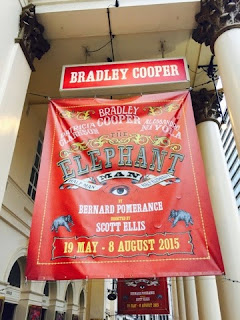 Last Friday night Stuart and I went to see Bradley Cooper in/as The Elephant Man at the Theatre Royal Haymarket.

Now I'm a big fan of blue-eyed Mr Cooper on the silver screen and he comes across well in interviews. Also the film The Elephant Man is a classic - although this play is not based upon that but on the same original source material.

The story of tells of disfigured John Merrick and how he gets treated first as a side-show attraction at a circus and then for a second time as one in polite society.

So I had high hopes.

And these were mostly met. Mostly.

First the problems I had with it. The play was rather plainly staged - as per it's trusted directions - but the simple 'a chair here', 'a table there', 'a couple of curtains' I actually found a little distracting. The rich, detailed, colourful world of the circus side-show and later the detailed Edwardian parlour room that should so clearly be there to mask rather than juxtapose John Merrick's deformity were simply absent. A bird in the gilded cage needs the cage to be gilded as this helps the captor justify their cruelty of capture. The fact that Bradley Cooper's Merrick also has no make-up but acts Merrick's deformity only seems to only accentuate this problem.

But quibbles aside, we enjoyed the show and Mr Cooper has fine as our protagonist - albeit a little fey as times. The story flowed well and there were laughs as well as tears along the way. It must have taken quite an effort to have acted the deformity for the entire performance. It's a short show though and we were out on the pavement by 9:30pm.