Charlie and The Chocolate Factory... 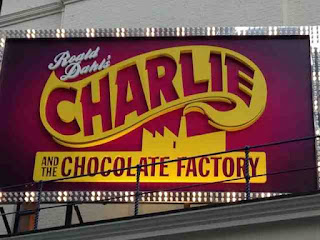 Last night Stu and I (and indeed Mark and Sarah) went to see Charlie and The Chocolate Factory at the Theatre Royal Drury Lane in London's glitzy Covent Garden.

Directed by Sam Mendes but still in previews we had high (but not stratospheric) hopes of it being a great show. This readjustment of expectations turned out to be a good thing in the end. Great it was not.

Following the book perhaps slightly more closely than either of the film versions Charlie and The Chocolate Factory tells the story of the poor Bucket family of mother, father, four grandparents and only child called Charlie. Charlie collects rubbish from around the dump where they live to give to his family as presents. Cabbage soup with no cabbage is their nightly fare.

Nearby the mysterious Willy Wonka runs a chocolate factory and after many years of secrecy is planning on opening up his factory for five lucky children to explore. Five golden tickets are hidden in Wonka chocolate bars the holders of which will get a tour and a lifetime's supply of sweets. A rag bag of largely horrible kids eventually win themselves a ticket each along with our hero Charlie. Then the doors to chocolate factory are flung open wide and the fun really starts. Or it should do. We were less than impressed to be honest.

The first act takes place in the Bucket's dump. It's slow, has unmemorable songs and static staging. The only flicker of fun is the appearance of the other four children. Sadly even this was marred by the substandard sound. It was so poor you could barely hear what they were singing which was a shame as there were comedic lyrics that deserved to be heard.

Things picked up in the second half a bit with the appearance of Willy Wonka himself and the parade of multi-coloured scenes from within the factory. The Oompa Loompas were fun, the set pieces were inventive enough but the thing never really took flight. The pace wasn’t so much rattling as staggering. You didn’t really care about Charlie much and the fun usually which is usually to be had from the horrible kids and their various sticky ends was all but wasted. The staging was fine but back-projection has come on a lot recently (Ghost, Curious Incident etc.) and this wasn’t exactly cutting edge.

Forgettable songs, uninspiring staging and poor sound all did this show in.
Maybe it will improve after previews. Maybe it'll find an audience with kids. The coach parties will come from the provinces I expect but it's the weekday attendances that help a show sink or swim. It's not awful, it's just not brilliant. And at £80 a ticket it should be brilliant.

Matilda does Roald Dahl so much better - great songs and strong story telling. Sadly Charlie and The Chocolate Factory had neither.