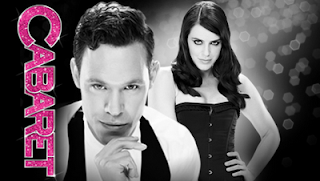 Last Thursday Stu and I went to see Cabaret at the Savoy Theatre in London's glitzy West End.

Starring Will Young as the Emcee and Michelle Ryan as Sally Bowles it was the essentially the same Rufus Norris directed production we saw back in 2006 at the Lyric Theatre starring Anna Maxwell Martin as Sally and James Dreyfus as the Emcee.

Kander and Ebb's remarkable musical turns the pre-war Berlin of 1931 into a dark and sexually charged haven of decadence, its extraordinary and morally ambiguous inhabitants determined to keep up appearances as the real world - the world outside the comfortable sanctuary of the cabaret - prepares for the nightmarish chaos of war.

Sadly there was a slight mismatch between the acting skills and the singing skills of its stars. Will Young could do the latter but not the former. With Michelle Ryan it was vice versa.

The musical numbers were excellent however and the dancing troupe are up to high Bob Fosse standard and conveyed the throbbing sexuality of the Kit Kat Club to a tee.

And as with the 2006 production there was a fair bit of nudity. It wasn't gratuitous in any way though. It was all in the best possible taste. And in fact used quite poignantly at the end.

Posted by overyourhead at Monday, October 15, 2012