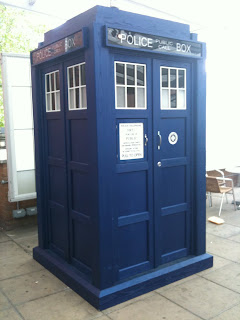 On the way in we got a chance to take some snaps of a replica TARDIS. It would be churlish to say that this was the best part of the night - because the show was very funny. It's just the recording goes on for so looong. Nearly three hours.

The show is being broadcast tonight on BBC2 at 10pm.
Posted by overyourhead at Thursday, July 01, 2010