Talking Heads #2 : The Shrine and Bed Among the Lentils @ Bridge Theatre... 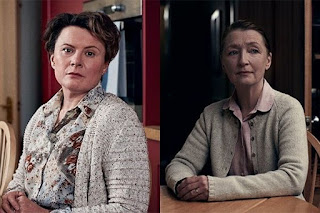 Last Saturday Stuart and I went to see the second brace of Alan Bennett's Talking Heads monologues put on at the Bridge Theatre in London's glitzy London Bridge Quarter. It was the RAC followed by AA.


The Shrine sees Monica Dolan play Lorna, a woman coming to terms with the death of her husband Clifford. Or is it Cliff? As Lorna sets up a shrine near the place where Clifford's motorbike left the road and crashed into a tree various characters come forward who cast doubt on who Clifford really was. A bird watcher? A speeding wanker? Gay? A friend to many others certainly, and a distributor of Lorna's fancy sandwiches. And who do you call when your husband dies anyway? The RAC?

As Dolan summons for us the skid marks on the road, which her shrine making doesn't want transgressed, the circling kite, the field of sheep, we keenly feel her loss. It is a study in bereavement made all the more potent by its complexity: does Lorna feel grief or only loneliness? And the decision to bear witness has its own kind of quiet heroism, not exactly dented but transformed by meeting a surprising fellow mourner.

Compared to the recorded TV version earlier this year (also played by Dolan) here the piece felt so much more alive. Ironically for a piece about death.

The tone of the second piece, Bed Among the Lentils, is far more comic: Lesley Manville's deadpan vicar's wife Susan, looks back on her adventures and brief moments of happiness while under the influence of the sherry and the communion wine. The monologue maintains a tone of scathing sarcasm towards Susan's hypocritical husband and "fan club" flock that invites us to laugh along with her. After Susan eventually attends Alcoholics Anonymous, her husband even uses the fact to further his own career - exampling his own sufferance and forbearance. More eye-rolling laughter.

The tender notes of the play do come and are sounded towards the Indian grocer – 26, lovely legs – who creates for them both the Bed of the title.

Manville is as charismatic as ever.

The cathartic sense of loneliness shared in both these plays could not be more timely or welcome.
Posted by overyourhead at Wednesday, September 23, 2020