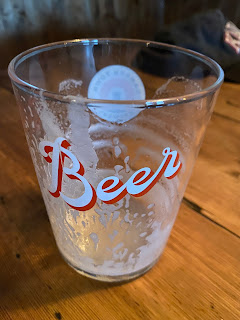 Guess what we got served?

We paid for the smaller beer. We drank it. But won't be going back.

This exchange in the pub last Thursday night had reminded me of this passage from George Orwell's "1984" (written in 1948) where Winston goes into a prole pub and intercedes on behalf of an old man who's upset because the bartender won't serve him beer in a pint:

"...The old man whom he had followed into the pub was standing at the bar, having some kind of altercation with the barman, a large, stout, hook-nosed young man with enormous forearms. A knot of others, standing round with glasses in their hands, were watching the scene.

"I arst you civil enough, didn't I?" said the old man, straightening his shoulders pugnaciously. "You telling me you ain't got a pint mug in the 'ole bleeding boozer?"

"And what in hell's name is a pint?" said the barman, leaning forward with the tips of his fingers on the counter.

"Never heard of 'em,' said the barman shortly. 'Litre and half litres - that's all we serve. There's the glasses on the shelf in front of you."

"I likes a pint," persisted the old man. "You could 'a drawed me off a pint easy enough. We didn't 'ave these bleeding litres when I was a young man."

"When you were a young man we were all living in the tree-tops," said the barman, with a glance at the other customers.

There was a shout of laughter, and the uneasiness caused by Winston's entry seemed to disappear. The old man's white-stubbed face had flushed pink. He turned away, muttering to himself, and bumped into Winston. Winston caught him gently by the arm.

"You're a gent," said the other, straightening his shoulders again. He appeared not to have noticed Winston's blue overalls. "Pint!" he added aggressively to the barman. "Pint of wallop.'"

The barman swished two half-litres of dark-brown beer into thick glasses which he had rinsed in a bucket under the counter."
Unlike the proles in "1984" we can vote with our feet. No short measures for us.
Posted by overyourhead at Monday, July 13, 2020