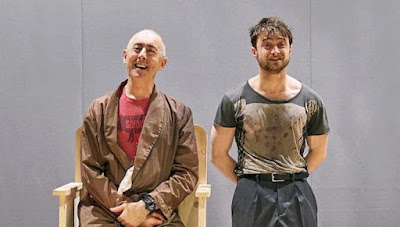 Last week Stuart and I went to see a double-bill of short Samuel Beckett plays at the Old Vic in London's glitzy Waterloo.

Beckett's usual preoccupation with the ever-present imminence of death casts a murky glow and existential crisis over both pieces. Sadly that glow was a tad too murky even for us.

This preoccupation with death is amplified in director Richard Jones's production - played right at the front of the Old Vic stage on Stewart Laing's sets that juts out beyond it.

However, there is also a relentless attempt to find laughs in every moment. But this is the kind of crushing humour that simply dies in your throat even if you catch its improbable drift. As a result, this is mostly a strenuous, laboured evening that feels a lot longer than it is, and is unnecessarily padded out by the inclusion of the rarely-seen Rough for Theatre II, as a curtain-raiser to the main event of Beckett's more famous Endgame. 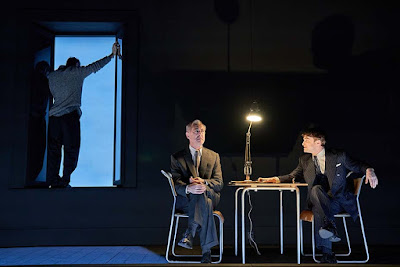 While Beckett completists may appreciate the chance to see Rough for Theatre II, it's a teasingly pointless sketch which runs for barely twenty minutes in which two bureaucrats sit at their desks beside an open window, from which a man is supposedly poised on the brink of throwing himself to death. There's a lot of dry business with a malfunctioning desk lamp, but it hardly counts as dramatic action.

At least it had the virtue of being short. Endgame, in which a grudging servant dances attendance on his blind, chair-bound master and his elderly parents, is four times longer and even more perplexing. As a study in terrible mutual co-dependence, in a world where resources are fast receding from grocery to medical supplies, there's an advancing sense of terror. The master Hamm's parents, meanwhile, are famously occupying onstage metal dustbins, lined with sand (after the sawdust has run out) as they await certain death but are able to briefly provide each other with momentary consolation.

The luxuriously cast with star names might seduce unwary theatregoers. Daniel Radcliffe was last seen on the Old Vic stage in Stoppard's Rosencrantz and Guildenstern are Dead in 2017, another vaudevillian double-act; if that play is dense and knowing, it doesn't require as much heavy lifting as this evening does, and Radcliffe’s Clov is embarrassingly pressed into doing a ministry of funny walks in Endgame (and some unfathomable business on descending a stepladder which is sort of funny the first time but ridiculous by the eighth). He is paired with the enigmatically creepy Alan Cumming, whose naked, hairless match-stick legged Hamm reminded me of Glenda Jackson's similar uncovering in King Lear on this stage.

There are two brilliant cameo turns from a virtually unrecognisable Jane Horrocks and Karl Johnson as Hamm's parents, but they can't save it anymore than they can save themselves.

A few people left. Many more, I suspect, wished they could have done without being noticed.
Posted by overyourhead at Friday, February 14, 2020