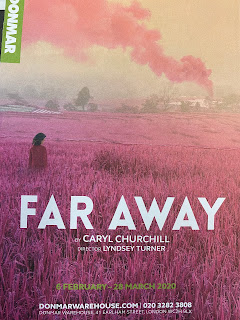 Lasting just 45 minutes it is a very short, three-act play about what might happen. To us. When everybody is at war. Even Nature. And it's fab.

In a cottage far away, a child wakes to the chilling sound of screaming. And there is blood. Who will tell her what is going on?

The child is now grown up. And she is working in a factory. Making dozens of incredible hats. But for whom?

The child has returned from being away. What does she know about the world sliding into chaos? And whose side are the elephants on?

Directed by the ever-reliable Lyndsey Turner and starring Jessica Hynes it a scary story of what the future might hold. Or indeed what might be going on right now but we turn our heads away. And of how government propaganda can make us think even Nature is against us. Fake News indeed.

Posted by overyourhead at Monday, February 17, 2020