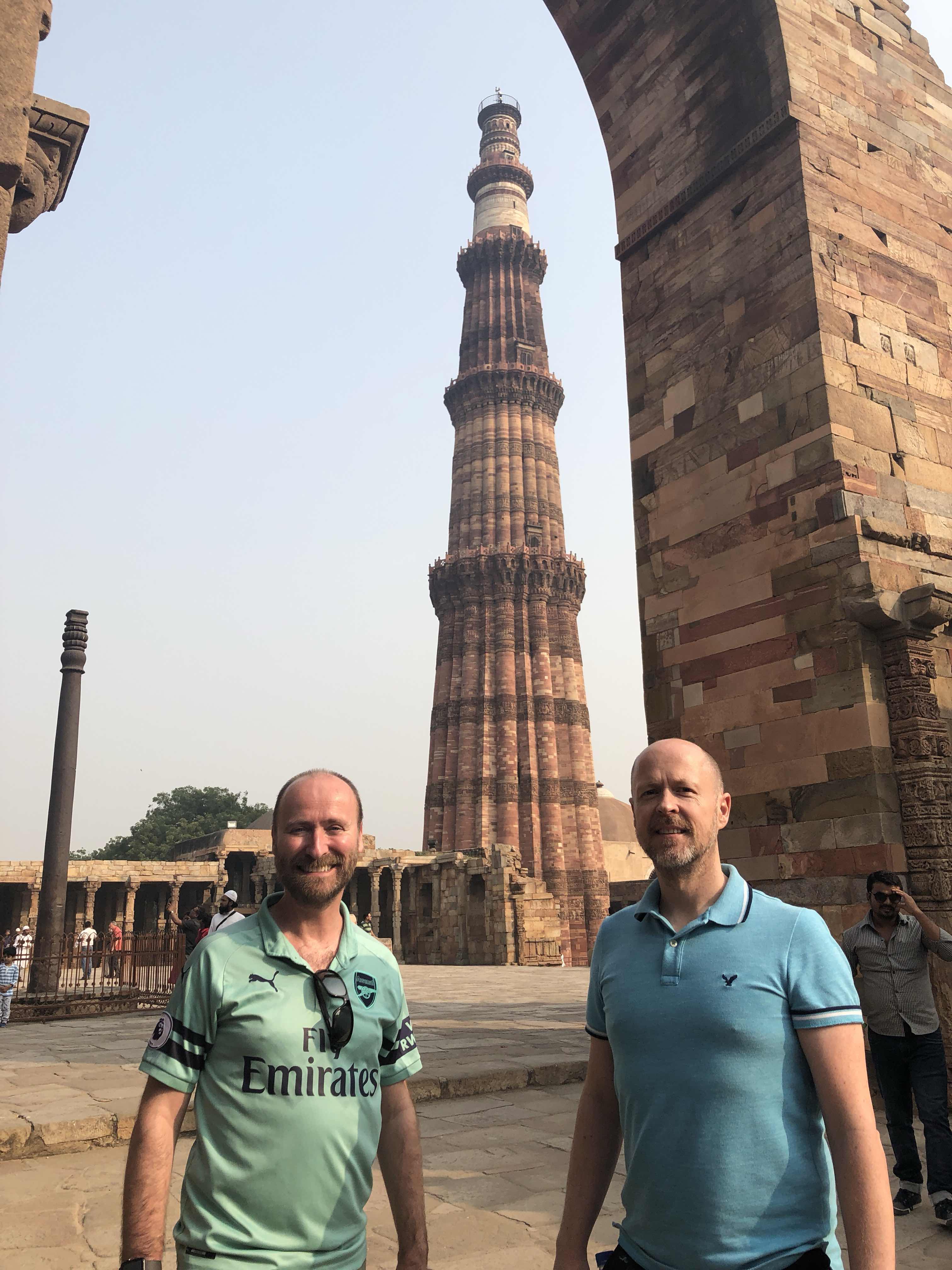 Today Stuart and I spent the day exploring some of the highlights of the craziness that is Delhi - tasting the food, tasting the pollution, and dodging the traffic.
Top tip: when crossing the road in India - look left, look right, look up and pray!
We started off at the very grand Indian presidential buildings, then followed the Raj Path to the India Gate. The pollution everywhere was self evident. You could almost taste it.
We then visited the Jama Masjid (the Friday Mosque) in Old Delhi. It is the second largest mosque in the subcontinent, with a capacity for over 20,000 people. The mosque was built between 1644 and 1658, by the last two of the great Moghul rulers, Shah Jahan and his son, Aurangzeb. The atmosphere was a mixture of serene calm and social centre. We had to take off our shoes and don a leg wrap each as we were only wearing shorts and had to cover up our legs. Not very fetching outfits. We refused to pay the Rs.300 to use our phone to take photographs though. But our guide sneaked a quick piccy of us anyway.
We then visited The Red Fort. Built by the creator of the Taj Mahal, Shah Jahan, with 2.5 kilometres of snaking battlements, the fort dominates the skyline of Old Delhi. It is mostly now occupied for military purposes. Then we drove to Raj Ghat, the site of Mahatma Gandhi's funeral pyre after his assassination in 1948. Very moving.
The highlight of the tour though was a walk (a fight?) and brief cycle rickshaw through the bustling Chandni Chowk Bazaar area before heading into the maze of narrow winding alleys that are lined with shops selling all manner of items and busy residential areas. The sheer number of people of all different religions living and working in this small area really is fascinating. The colours, the noise, the smells, the craziness, the traffic, the people. It was intoxicating.
The final part of our afternoon was a visit to New Delhi. A great deal of New Delhi is inhabited by the more influential of India's citizens, in particular the diplomatic enclaves and the wide boulevards surrounding them. The monumental buildings which Sir Edward Lutyens and Sir Herbert Baker designed at the end of the British Imperial era remain some of the most impressive governmental symbols in modern India.
We got to see the very tall Qutub Minar too. It was the tower of victory erected after Delhi's last Hindu king was defeated by Turkic invaders in 1199. Nearby were the standing remains of a mosque erected in the same era, using stones from even earlier temples of Hindu and Jain origin. All the erotic carvings were etched out by the invaders sadly.
Finally we visited Humayan’s Tomb - a fine example of Mughal architecture and a forerunner to the Taj Mahal as a mausoleum. It was built for the second Mughal Emperor, who was defeated by the Afghans in 1540 but managed to recapture Delhi in 1555. Humayan had a very close relationship with his barber and insisted he be buried next to him when he died. Rumours about their relationship persist to this day....
In the evening to decided to return to Old Delhi for a few hours to wander through the craziness some more, dodge the traffic, and sample some of the street food. I know what you're thinking. Delhi Belly! We were asking for it! But no, the food was great. Very tasty and just as weird as we though it was going to be. And just the right side of criminally spicy. Yum!
Ten stops, ten street vendors:
Biryiani
Haleem
Kebab (chicken, lamb, and buffalo)
Shahi tukda
Firni
Jalebi
Water fruit
Chicken tikka
Kebab (mutton)
Halwa 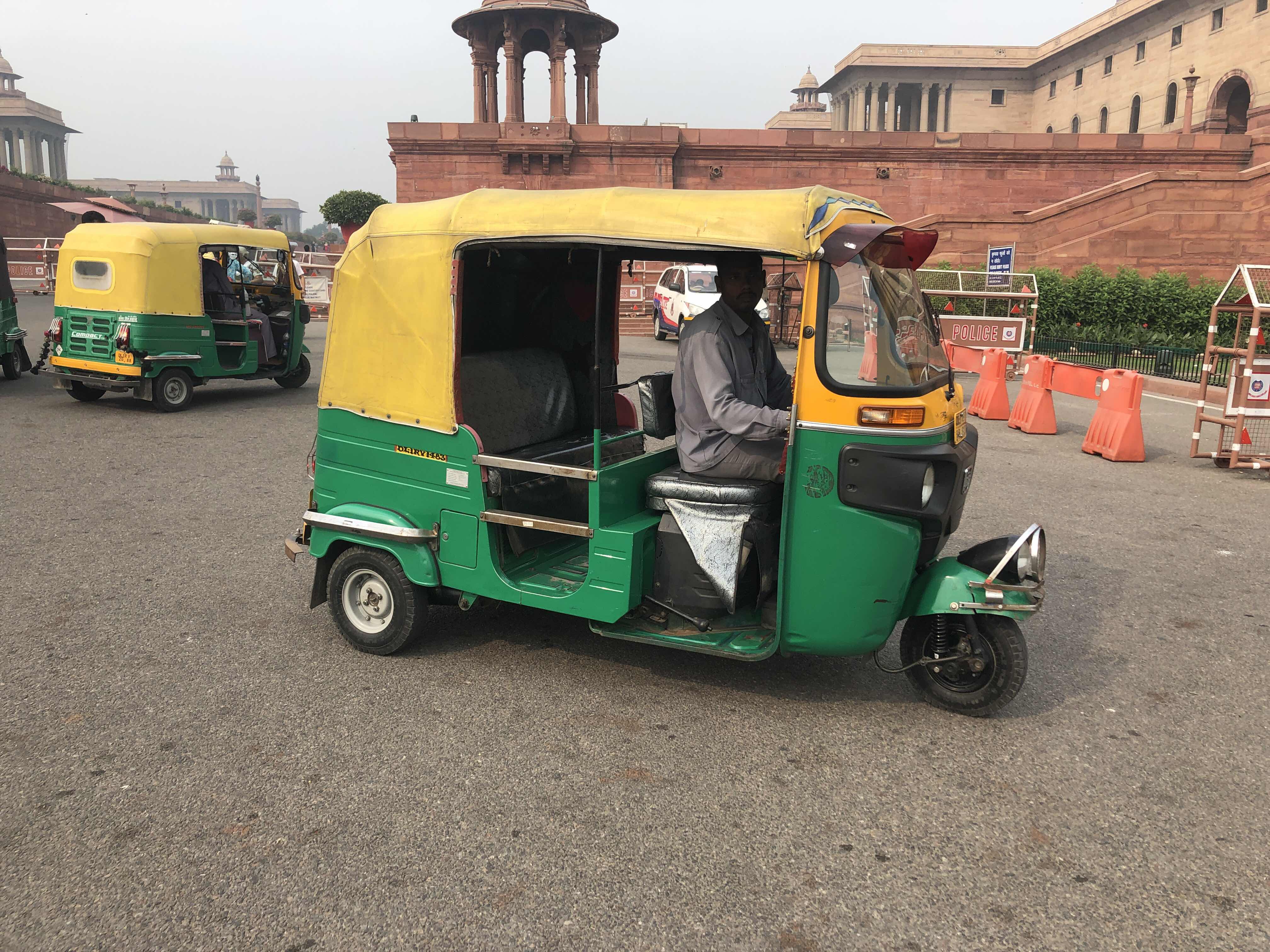 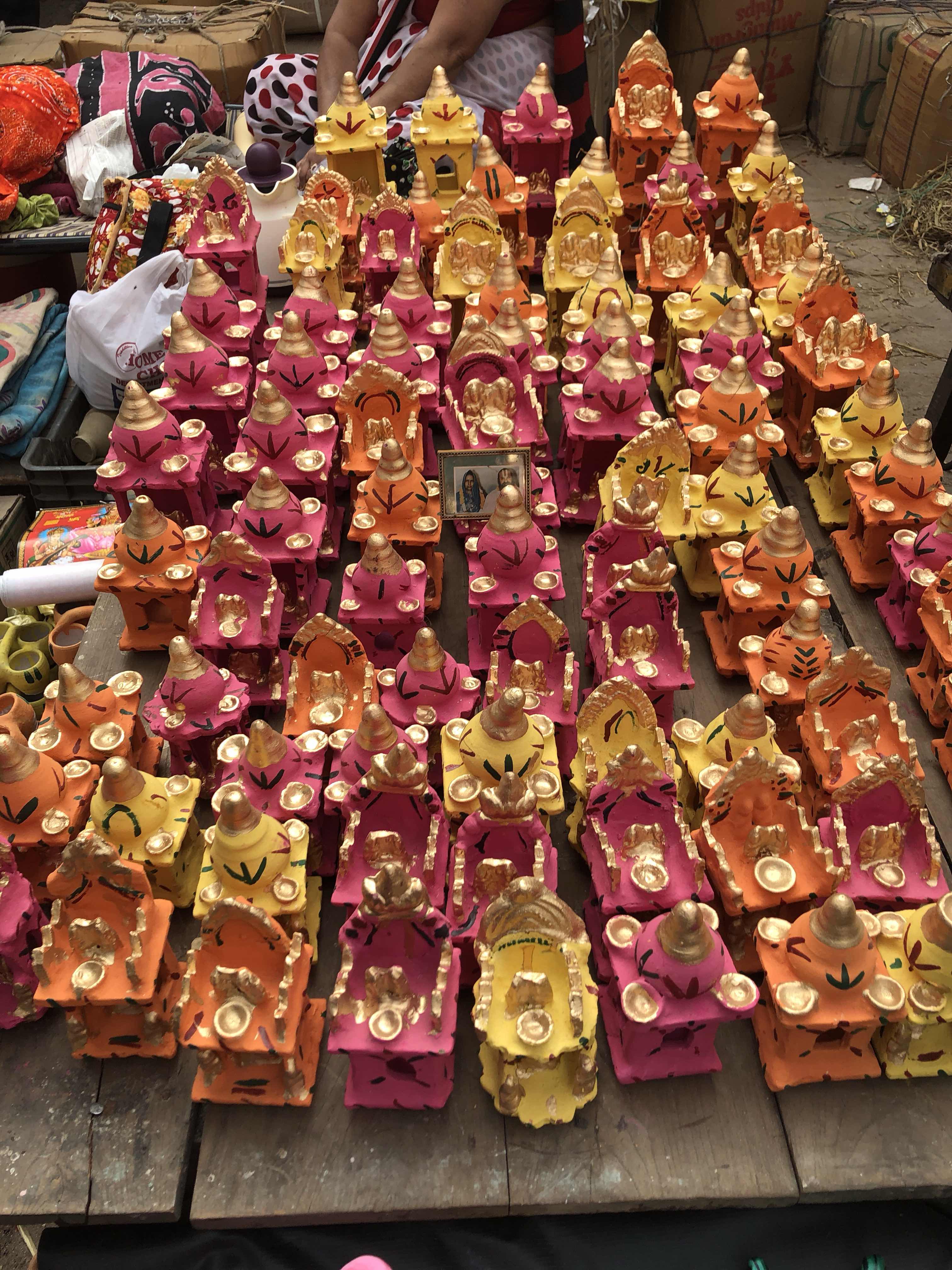 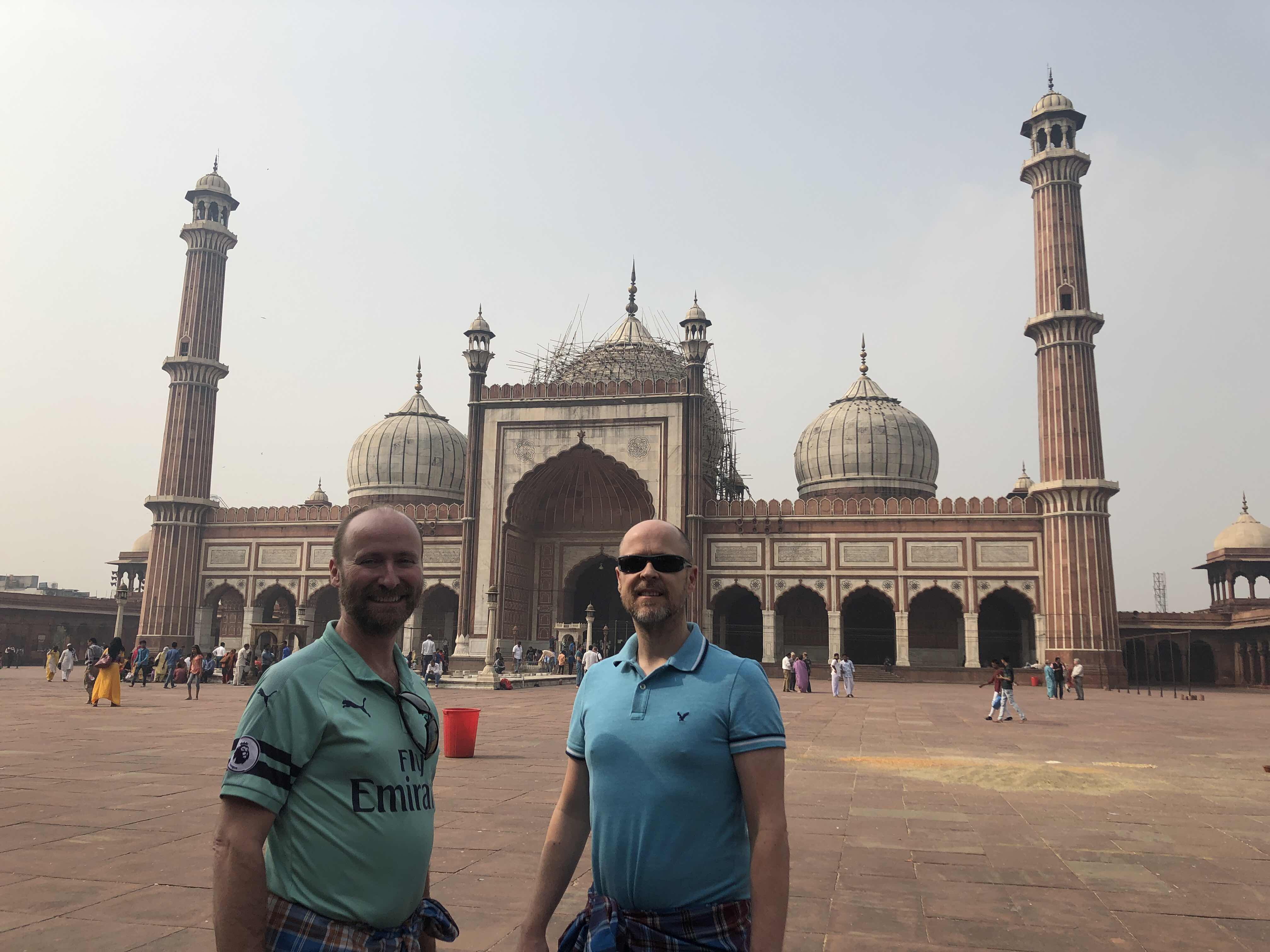 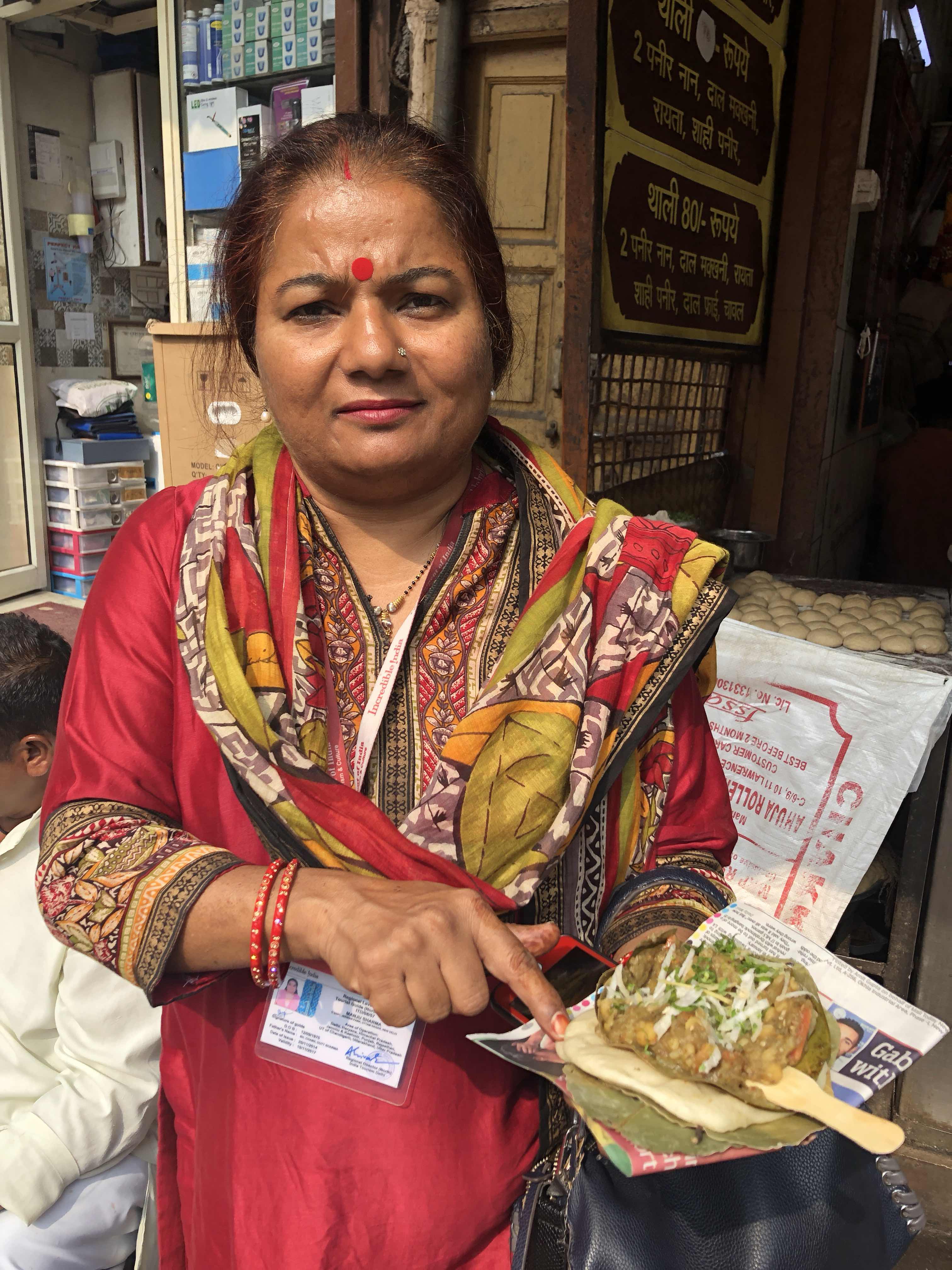 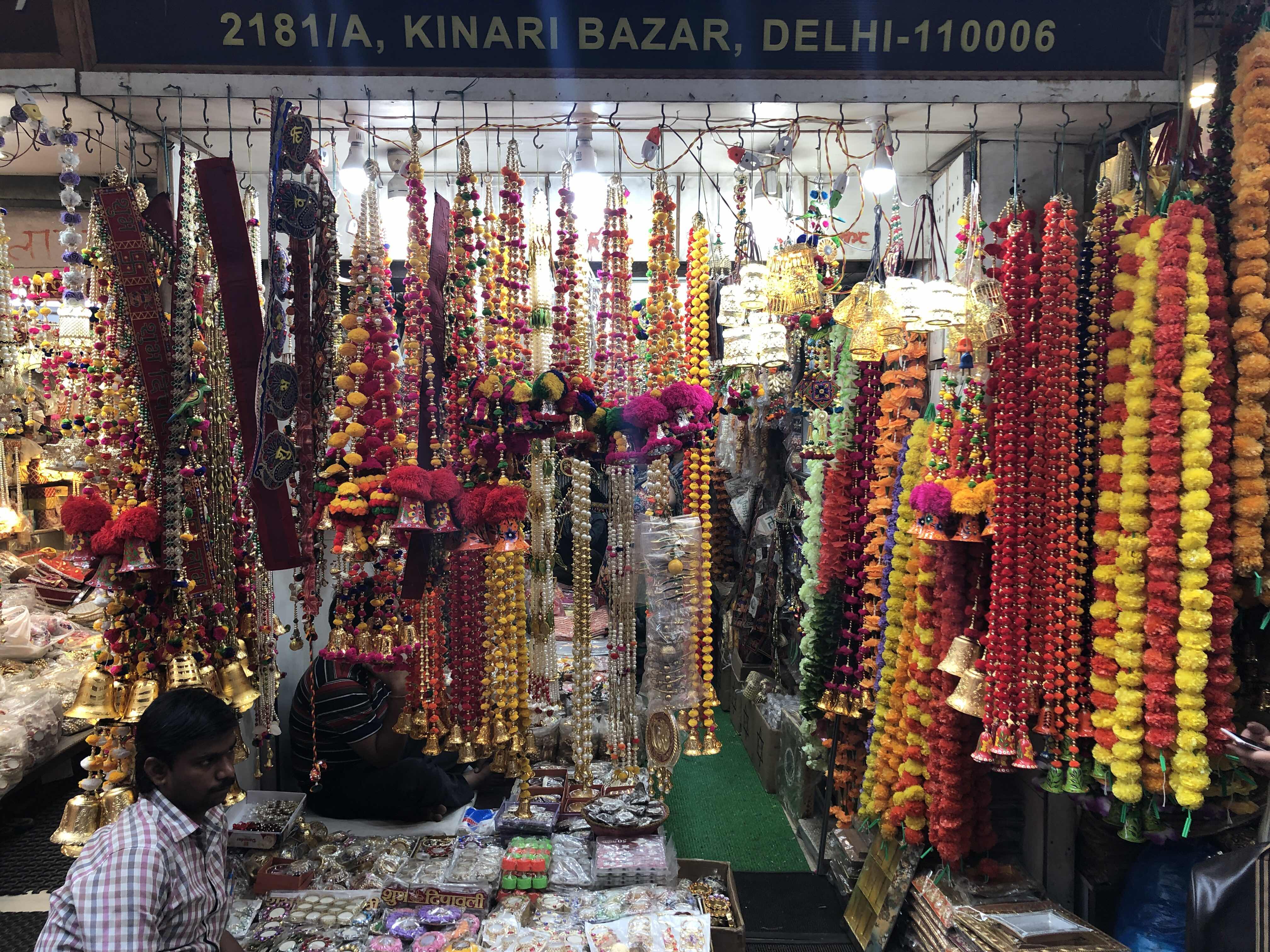 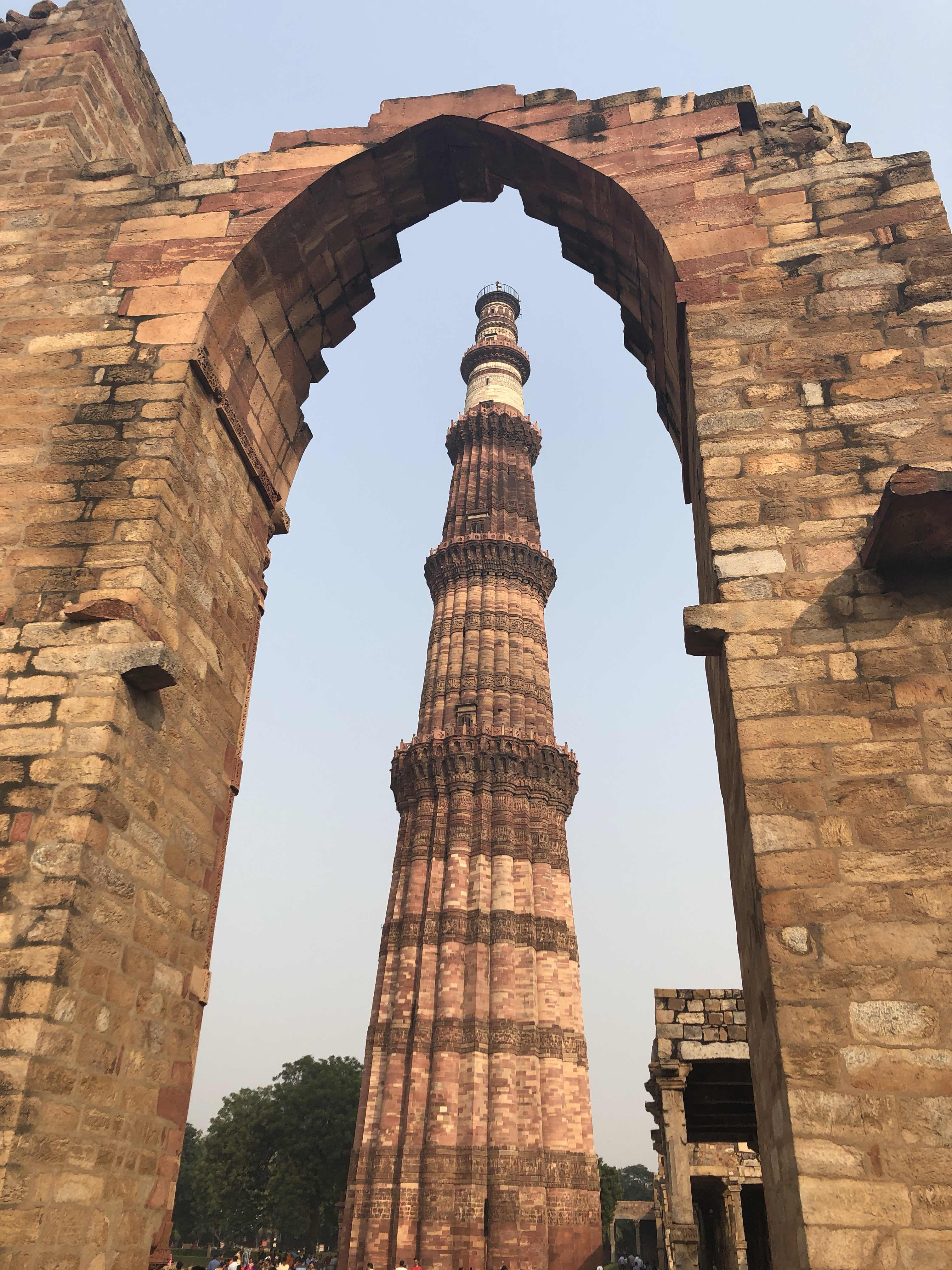 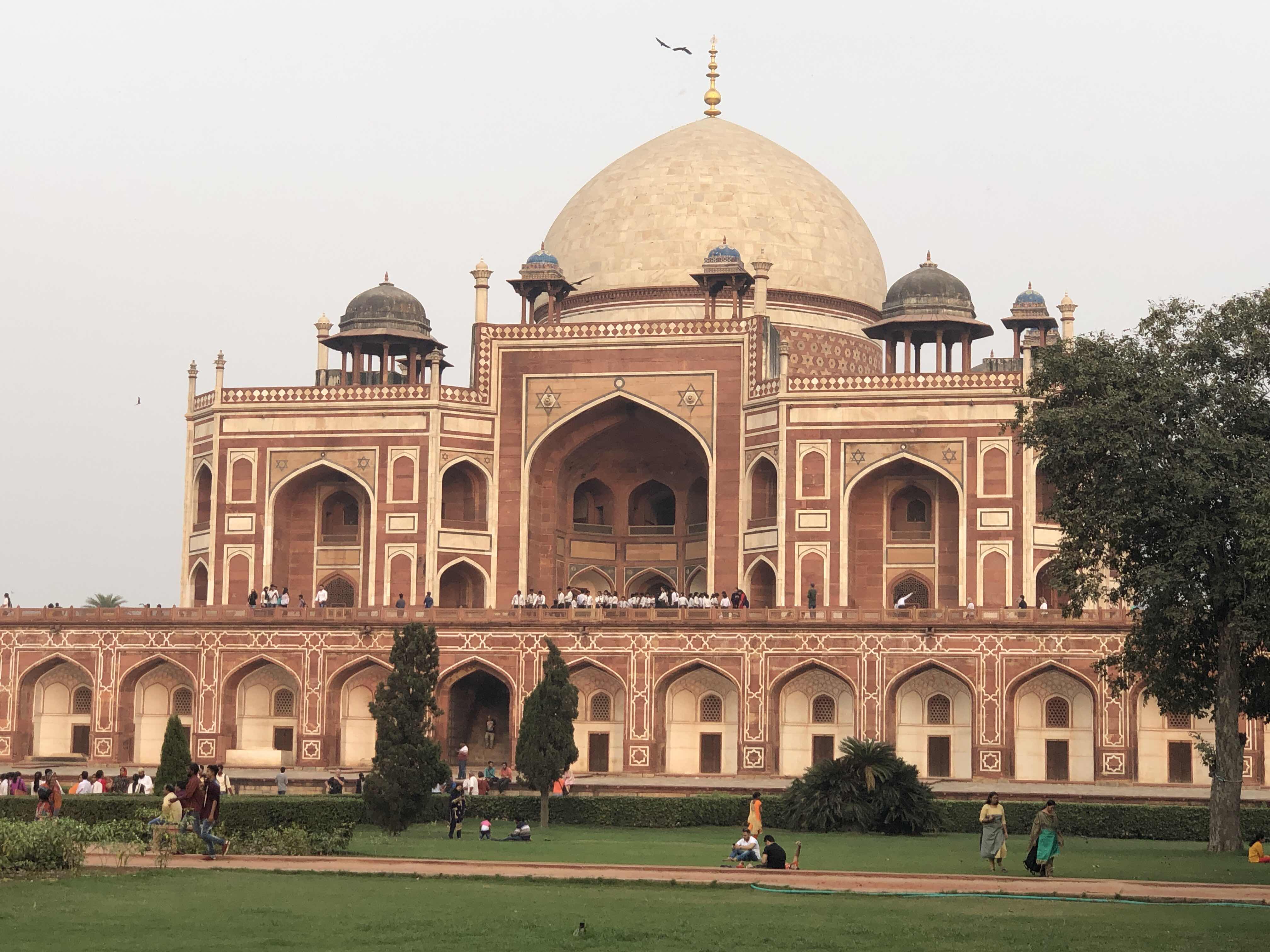 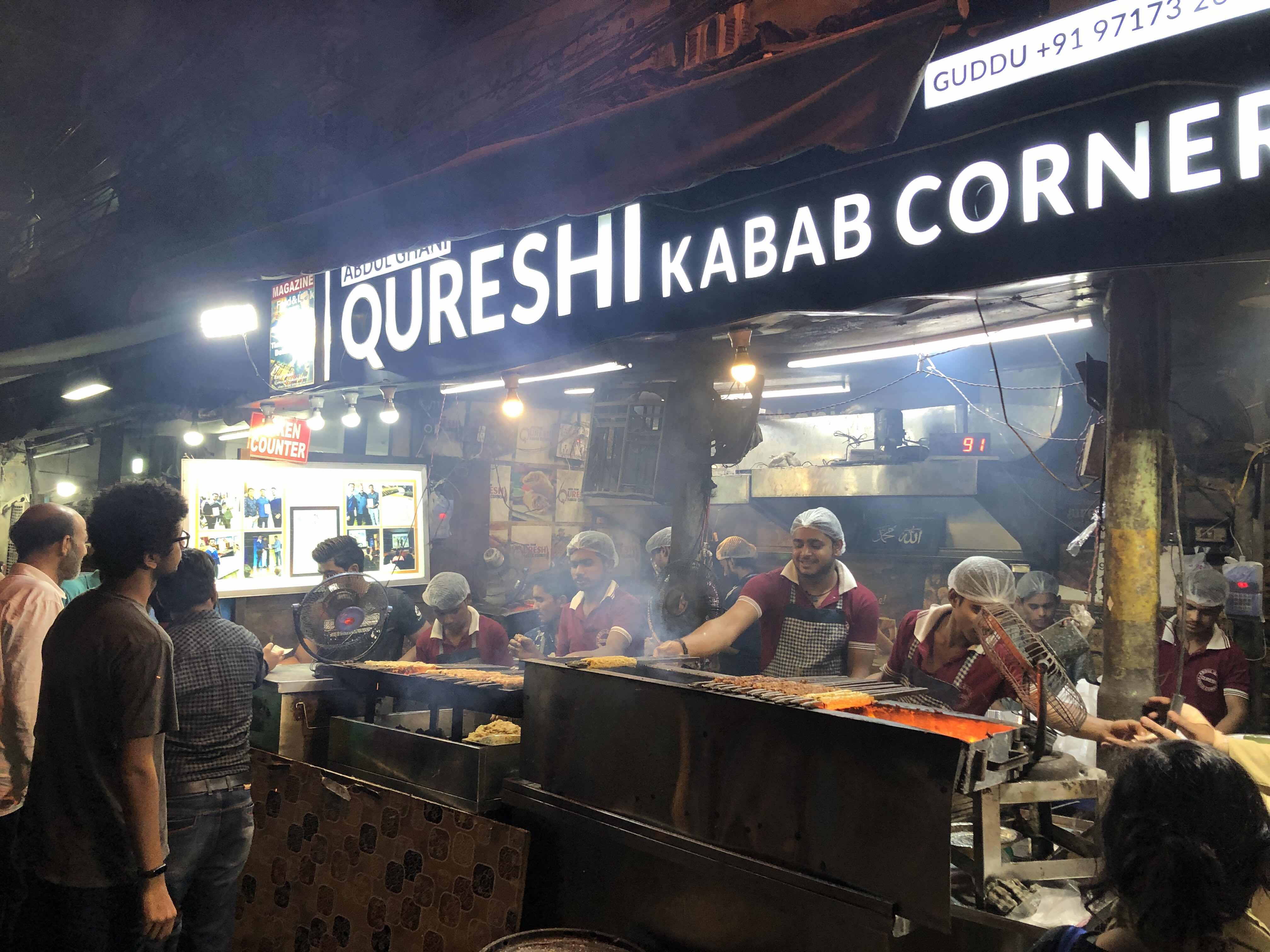 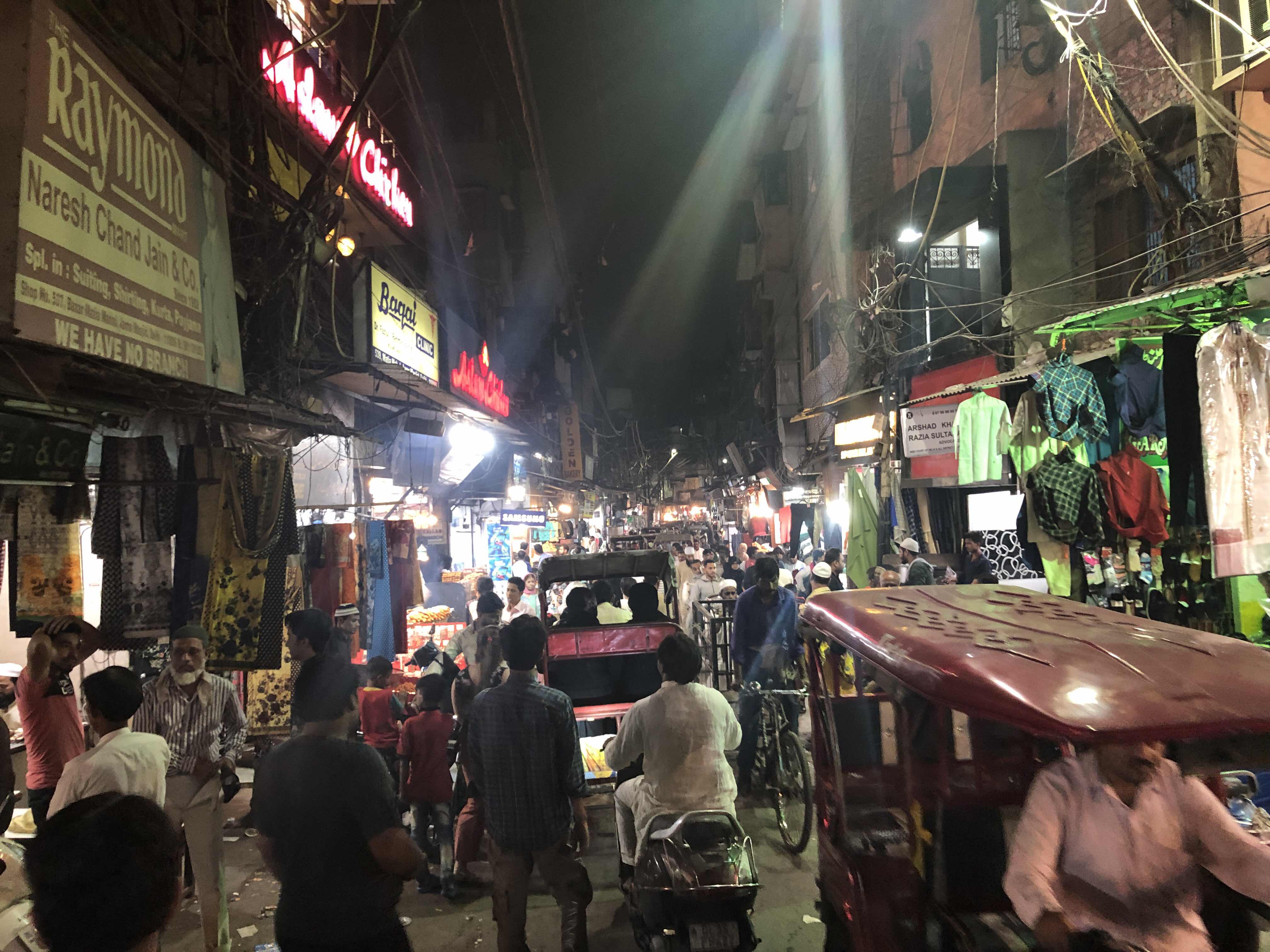 Posted by overyourhead at Saturday, November 03, 2018