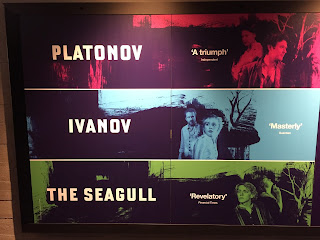 Last Saturday Stuart and I went to see three early Anton Chekhov plays in one day at the Olivier Theatre on London's glitzy South Bank.

So that's eight hours of Russian navel-gazing where not much happens, right? Wrong! It was a riot.

Starting with the hysterically funny play Platonov, then moving on to the moodiness that is Ivanov and finally ending with the tragedy that is The Seagull the disposition of the day started with high farce before descending into deep depression. And we simply loved it. Masterfully adapted by David Hare and skilfully directed by Jonathan Kent the ensemble cast took on each play deftly mixing and matching the roles with aplomb. A gardener in one play might be a lord in the next. The juxtaposition of the casting was as clever as it was rewarding.

The set evolved too. Throughout the day the tempo of the plays mutated gradually - almost Darwinianly. Subtle changes to the positions of the stage trees as if by chance lead to a tightening in the focus of the drama ever inwards. The lighting slithered and constricted as it encircled the players into one claustrophobic space. Even the way water was used heightened the feeling of closeness - at first it was passive as the lake taking up half the stage until it was raised up and used as rain in the later play actively attacking our heroine as she sought redemption. In fact water acted as a beautiful metaphor for the three plays. As first playful and still and then vengeful, destructive and drenchingly deadly. 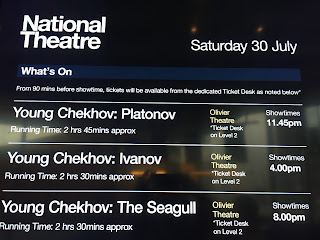 Platonov @ 11:45am
Schoolteacher Mikhail Platonov has a problem – he’s irresistible to women. Set in the blazing heat of a rural Russian summer, this freewheeling comedy is a cry of youthful defiance against the compromises of middle age. Scots actor James McArdle is superb as the Don Juan-type schoolmaster at whose feet women throw themselves like lemmings. Platonov as a play perhaps deserves better recognition that it currently enjoys. It's a scream. And Hare's adaptation is high farce - even Jonathan Harvey would have been proud of it. Gimme Gimme Chekhov, anyone?

Ivanov @ 4pm
Nikolai Ivanov is only 35, a radical and a romantic, but already he’s feeling that he’s thrown his life away. He's miserable, moody and full of self-loathing. Determined not to become a small-town Hamlet, he hopes one last desperate romance may save him from a society rotten with anti-Semitism and drink. This electric play is powered both by hilarious satire and passionate self-disgust.

The Seagull @ 8pm
The most famous of the trilogy The Seagull takes place on a warm summer’s day in a makeshift theatre by a lake. Konstantin is a playwright and son of an over-bearing fading actress Irina who he is desperate to impress. His cutting-edge new play is being performed by the love of his life ingénue Nina. What could go wrong? Quite a lot as it as it turns out. Chekhov’s masterly meditation on how the old take wicked revenge on the young is both comic and tragic, and marks the birth of the modern stage. A treat to watch. Anna Chancellor as Irina is simply scene-stealing.

If you get the chance to go to see any or all of these plays, do.
Posted by overyourhead at Tuesday, August 02, 2016