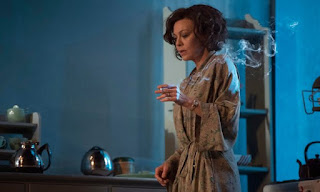 The play is a devastating masterpiece which contains one of the greatest female parts in contemporary drama. Helen McCrory takes on this role and her Hester Collyer simply blazes. From start to finish she exudes through every pore what Shakespeare called “the very wrath of love.”

I was in floods of tears as Hester is dumped by Freddie the man she loves. It is just too painful to see her pleading for one last look at him. For Freddie is no cad. He loves her too. But just not as much as she loves him. And it is this imbalance that causes their love boat to sink beneath the waves of despair.

It is Terence Rattigan’s best play by a long chalk - basing the story and characters in part on his own secret relationship with Kenny Morgan, and the aftermath following the end of their relationship. The first draft of the play was between two men but he transposed it to a straight couple with great effect.

Throughout the play Rattigan builds up a portrait of a society; the young married couple upstairs embody middle-class orthodoxy, the struck-off doctor who comes to the suicidal Hester’s aid is a sexual outlaw, and the gossipy landlady represents working-class tolerance. When you add in Hester’s high court judge husband, you have a composite picture of England.

This production is masterfully done and contains the powerful sense of ruin that both the play and the role of Hester warrant.