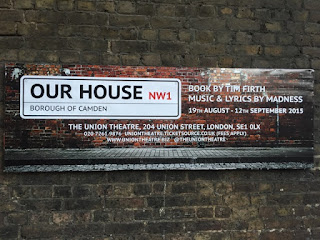 Where to start? Well, that's start with the facts. Last Saturday night Stuart and I went to see a revival of the Madness musical at the Union Theatre in not at all glitzy Southwark.

And now a few positives. Our House is a jukebox musical using songs by Madness. Yay! It got great reviews back when it was at the Cambridge Theatre for its initial run - not least by me. Yay! The plot is about growing-up and a social commentary on gentrification and housing redevelopment in Camden - and to that end it's functional, funny and fun. Yay!

However... although the production we saw was 'spirited', 'exuberant' and 'enthusiastic' there was little much else to warrant mention. OK the dancing was quite good, the acting sort of OK but the singing by the leads was frankly piss-poor. The chorus sang much better but the show rides on those main vocals, people. And the Sliding Doors plot of two simultaneous time-lines was so badly executed that even the cast seemed bewildered at times. In fact the cast - in hyper-mode most of the time rushing about like crazed idiots - plainly were having way much more fun than we were in the audience. A great show like this deserves better. A West End revival please!

And let's face it, the Union Theatre is a bit of a shit hole (have you SEEN their toilets?!). Sure it revives musicals that often deserve a second airing and it is tough making a show work on a shoe-string budget but with the torturous seating, dank smell and the thundering rattling of the trains passing overhead a top night out it is not.

We were sat behind the mother of the main lead. He shall remain nameless but our heart when out to him when unprompted she told us how much he got paid for the entire 8 week run... he's the the lead, mind you... £120. Poor sod.
Posted by overyourhead at Wednesday, September 16, 2015