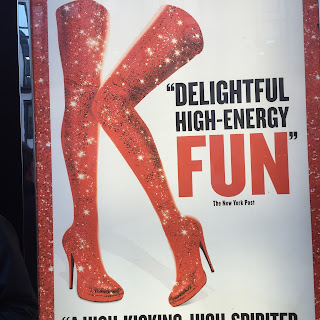 The book was written by Harvey Fierstein and based on the 2005 film of the same name starring Chiwetel Ejiofor - itself based on a true story. And we loved it. We really did.

Charlie Price (Killian Donnelly) inherits his family's shoe factory and facing closure hits upon an idea of making boots for drag queens. He befriends Lola (Matt Henry) who designs the boots and we get taken through the ups and downs and ins and outs of... well, every other musical plot you have even seen.

Yes, you've guessed it, it's the now traditional path of the-musical-of-the-film-that-was-a-moderate-hit-a-few-years-ago-where-a-Northern-English-town-falls-on-hard-times-as-the-local-manufacturing-industry-had-declined-back-in-the-1980s-and-the-narrow-minded-locals-have-their-eyes-opened-to-diversity-by-some-camp-bit-of-nonsense-or-entertainment-or-culture-that-ends-up-dragging-them-out-of-povety-or-whatever. Yes, I'm looking at you Billy Elliot, Made In Dagenham, The Full Monty, Brassed Off, Calendar Girls, Pride et al.

And we can all see the storyboard of these shows... It Was Great Back Then! It's All Really Shit Now! Young Person Says I've Got An Idea To Put Things Right! No One Thinks It's A Good Idea! Heart-felt Dramatic One On One Showdown Changes Mind Of Lead Characters! Everyone Think's It's A Good Idea Now! Everyone Pulls Together! It All Goes Wrong Right  Towards The End! Someone Who Thought It Was A Bad Idea At First Now Steps In And Saves The Day It At The Last Minute! You get the idea.

For amongst the glitter, the high-heels, and the feathers the story was told with real heart. It managed to weave in plenty of pathos too. The importance of acceptance and genuine sadness at being rejected by one's parents was realised no more acutely than in the song I'm Not My Father's Son. A real tear-jerker.

But don't get me wrong. This is not some simple worthy message-vehicle, this is a show about drag queens and the stage simply lit up whenever Lola and the girls took to the stage. Their dance numbers were well choreographed (thanks to Jerry Mitchell who is also the director), funny and very well sung. "Camp" doesn't even begin to describe it.

Sure the first half is better than the second, sure the final number needs a bit of work but these are but minor quibbles. It had us beaming from ear to ear pretty much throughout and I'd go and see it again in a shot.

It's for the ladies... and for the gentlemen... and those who haven't made up their minds yet.

Get your best glitzy lip gloss on and go see. 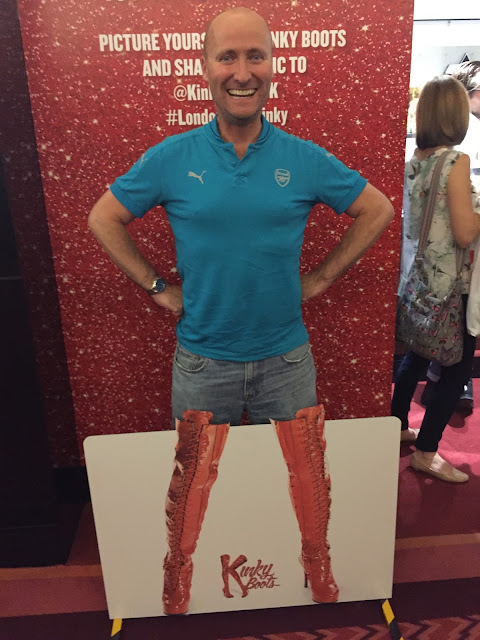 Posted by overyourhead at Friday, September 11, 2015