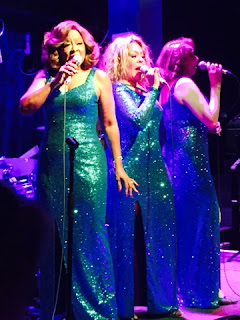 Last night Darren, Stuart and I went to see The Three Degrees perform at the Jazz Cafe in London's should-be-more-glitzy-than-it-is-really Camden.

Formed in 1963 in Philadelphia, which makes them the longest running female vocal group in history, The Three Degrees have been continuously touring for more than 45 years which is quite impressive. Of the 14 various members the current line-up is Valerie Holiday, Helen Scott and Freddie Pool.

The gals performed all the hits and more; Take Good Care of Yourself, Givin' Up Givin' In, Dirty Ol' Man, Woman In Love, T.S.O.P. (The Sound of Philadelphia), My Simple Heart and of course the sublime When Will I See You Again. Sadly no sign of disco smashes The Runner, Golden Lady or Jump the Gun though.

The last time we saw them was four years ago at Islington's glitzy Union Chapel. Same show. Still, we loved it.
Posted by overyourhead at Thursday, June 04, 2015